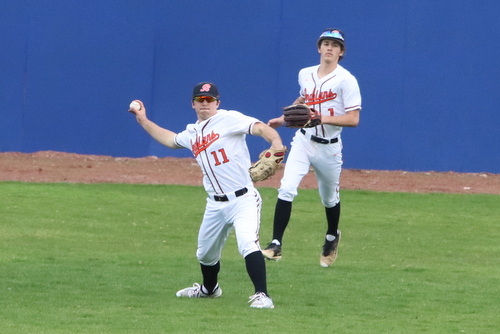 The Indians picked up a 4-3 win in the first game. Jett Black was 2-for-2 with a 3-run triple in the third inning and a double in the fifth. Spencer Six was 2-for-3 at the plate for the Indians.

Zack Mandera went the distance to pick up the win for Roseburg. Jonathan Stone exited the game in the second inning due to a knee injury.

In the nightcap, Roseburg defeated North 4-0 as Jace Stoffal pitched 6 no-hit, shutout innings. Garret Zeimet pitched the 7th, giving up one hit and no runs to close out the win.

Caden Johnson was 2-for-3 for the Indians, Ryley Culberhouse had an RBI and Luke Van Norman had an RBI double.

In softball, Roseburg was scheduled to play at North Medford Saturday night in the Southwest Conference.

Yoncalla was scheduled to play at Lowell in a doubleheader and Riddle's games at Central Linn were canceled due to rainAll games are weather-permitting.