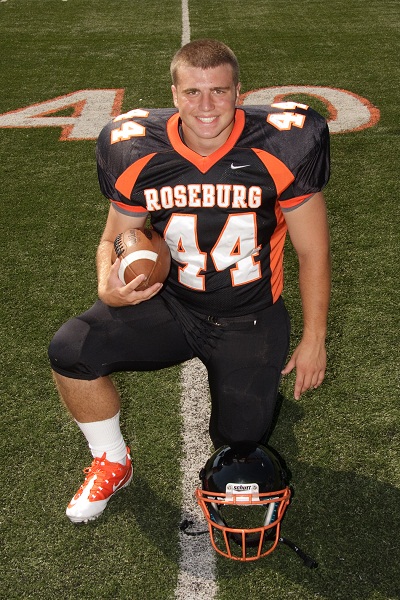 The Roseburg football team is poised for a run in the 6A state playoffs and much of the credit can be given to its stellar defense. Douglas County Sports Online is proud to shine the Avista Athlete Spotlight on senior linebacker Ben Goirigolzarri.

The two-sport athlete grew up in Roseburg and always dreamed of one day playing for the Indians. Ben always attended RHS football games and had an opportunity to become a part of the program at an early age.

"I can remember going to all of the games and watching Joe Newton ('02) play," Goirigolzarri said. "And when I was in the fifth grade I became a ball boy."

Since his arrival on the Roseburg campus, Ben has made the most of his career starting since his sophomore season and earning honorable mention all-league honors as a junior running back. However, it's his play on the defensive side of the ball that should garner some postseason awards in 2011.

"He's been solid at linebacker and has been the defensive player of the game three or four times this season," head coach Thurman Bell said. "Ben has been very consistent and is playing the best football of his career."

Once the football season ends, the 18-year old will head to the wrestling mat where he will set his sights on winning a second straight district title. He also believes a state title is within reach.

"The state rankings have me either second or third at 215 pounds," Goirigolzarri said. "There are a couple of very good wrestlers in my weight class, but I'm pretty confident about what I can do."

After graduation, Ben plans on attending college and has narrowed his list to the Air Force Academy, Princeton and Washington University in St. Louis.

"I'd love to play football at the next level," Goirigolzarri said. "But academics will come first."