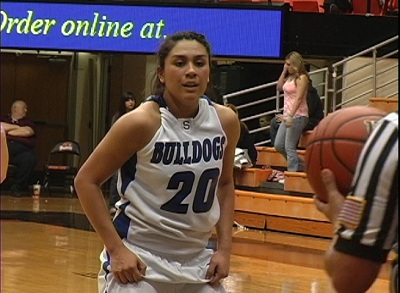 Sutherlin's run to the 2012 girls basketball state championship game could not have been accomplished without the leadership of this talented transfer. Douglas County Sports Online shines the Avista Athlete Spotlight on senior Kelsey Hill.

Kelsey was born in El Paso, Texas and raised in Coquille where she would become a three-sport athlete for the Red Devils. As a junior, Hill was honored for her talents on the basketball court and was named to the Oregonian's all-state first team. Following her successful junior campaign, she decided to make the move from Class 3A to 4A and transferred to Sutherlin for her season season.

"There was a lot more competition and it was fun playing against new teams and new people," Kelsey said. "I was able to try different things and play a variety of spots on the basketball court."

"She's a great player and a leader whose personality and effort match her basketball ability," head coach Josh Grotting said. "Kelsey helped us out a ton, but more importantly, she's a phenomenal kid."

The 2011-12 season proved to be a successful one for Hill and her teammates as the Bulldogs won 28 consecutive games before suffering a 41-35 loss to Henley in the 4A state title game. Kelsey was also named the Far West League's 'player of the year'.

"Our goal was to win a league title and make it to the state tournament and not many people have that opportunity, so I wouldn't change a thing," Hill said. "It was a fun learning experience and it was worth everything to be able to play for a great program and a great coach."

Kelsey will earn her high school diploma this coming June and plans to continue her education in the fall.

"I'm going to attend a two-year college and play baskeball or volleyball, Hill said. "My goal is to major in sports medicine and become either a sports therapist or athletic trainer."