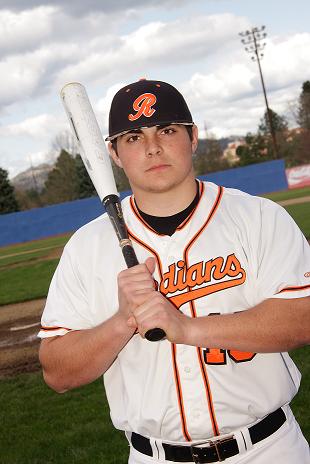 Since 2010, this two-time conference 'player of the year' helped guide the Roseburg High baseball program to three consecutive league titles and a pair of trips to the Class 6A state semifinals. Douglas County Sports Online is proud to shine the Avista Athlete Spotlight on 2012 graduate Josh Graham.

Josh was born into a baseball family and is the nephew of former major league catcher Jamie Burke. Like his uncle, Graham attended Roseburg High School and both had fantastic prep careers. This past season, Josh was selected as the Class 6A 'pitcher of the year' after finishing with a record of 10-1 and an earned run average of 0.97.

He was also named an all-state catcher and was joined on the first team by Roseburg pitcher Jared Priestley and second baseman Connor Newell. The talented trio led the Indians to an overall mark of 24-3, but they fell one win shy of playing in the 2012 OSAA state championship game.

"We were basically like a bunch of brothers on the team and it was impossible to come to the field and not smile, laugh and have a great time," Graham said. "It was relaxing and stress free when you're able to play on a team with all of your buddies."

The hard throwing, hard hitting star has also had his share of success during the summer American Legion baseball season. In 2009, he was a part of the single-A Pepsi team that earned a spot in the Regional tournament in Kearns, Utah and was a starter on the Dr. Stewart's triple-A team that made it to the 2010 World Series. Unfortunately, local fans will not see him on the baseball diamond in 2012.

"One of my favorite things was playing summer ball with the Docs and being part of a great program," Graham said. "My plan was to play again this year, but I got a phone call from a collegiate team in Klamath Falls, so I decided it was in my best interest to play with the Gems and get some experience against some different competition."

Klamath Falls is part of the nine-team West Coast League and Josh is one of more than 50 WCL players recently selected in the major league baseball draft. He was taken in the 22nd round by the Minnesota Twins and will have to make a decision in the near future since he has already signed a letter-of-intent to play for the University of Oregon.

"It's always been my dream to play college baseball at the division one level and to be able to share it with Jared (Priestley) makes it that much better," Graham said. "The facility in Eugene is amazing and the support they have around all Oregon sports is unbelievable."

His playing days are now over in Douglas County, but don't think you've heard the last of Josh Graham. There is plenty left to accomplish on the baseball diamond and he would like nothing more than to become the second member of his family to have a long and successful career at the major league level.