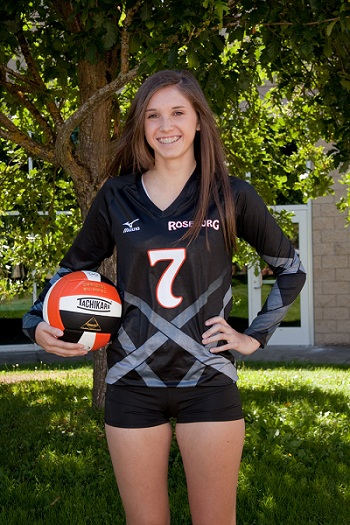 The Roseburg High volleyball team is hoping for a second straight trip to the Class 6A state tournament and the Southern Oregon Conference's returning 'player of the year' is just the person to help lead the way. Douglas County Sports Online shines the Avista Athlete Spotlight on senior Vanessa Bentley.

Bentley grew up in Roseburg where she attended Hughcrest Elemenatry and Jo Lane Middle School before making her way to the RHS campus. She has been a a four-year starter for the Indians earning the league's top honor in 2011 and a spot on the Oregonian's all-state first team.

"We finished sixth at last year's tournament, but didn't do as well as we wanted" Bentley said. "I'm a team captain along with Stefanie (Griggs) and our goal is to step up and help this team do better than last season."

Once the senior setter finishes her final volleyball season at Roseburg, she will take a break in the winter and get ready for spring tennis. Last season, Vanessa and doubles partner Anna Bruns were eliminated in the quarterfinals of the SWC district tournament. In 2013, the pair hopes to make another run at the district title and capture a berth at the OSAA state championships.

Though her high school career is about to come to an end, the 17-year old has been in contact with a number of colleges and will most likely continue playing volleyball at the next level.

"I've talked to a few coaches from Division I to NAIA schools," Bentley said. "I'd prefer to attend a college in Oregon, California or Arizona and would like to pursue a career in criminal justice."