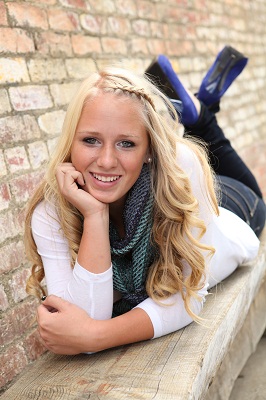 Even though her high school playing days may be winding down there is still plenty of softball yet to be played for this talented three-year starter. Douglas County Sports Online is proud to shine the Avista Athlete Spotlight on Roseburg senior Megan Larkin.

The 18-year old Larkin was born and raised in Roseburg attending Eastwood Elementary and Joseph Lane Middle School before making her way to the RHS campus in the fall of 2009. Megan played volleyball and participated in cross country, but her first love has always been softball. She got some varsity experience as a freshman and earned the starting job at third base a year later. In 2012, she was moved to shortstop earning second team all-conference honors as a junior.

The 2013 softball season has proven to be a successful one for the Indians as they sit in second place in the Southern Oregon Conference behind defending state champion North Medford. RHS has a core group of senior leaders led by Larkin and pitcher Makinna Akers.

"Makinna, Sydney (Reynolds), Emma (Thompson), Ashley (King) and I started playing together back in preschool and we've always dreamed of winning a state title," Megan said. "Our defense has always been solid, but now our bats have started to come around and we have six players hitting over .300."

The season is nearing an end, but Larkin's softball career will continue after signing a letter-of-intent last spring to play for St. Cloud State University, a Division III school in Minnesota.

"I had an offer from OIT in Klamath Falls, but chose St. Cloud because I liked the area and the small town feel," Megan said. "Everyone was nice and comforting and very welcoming, plus I've always pictured going out of state for school."