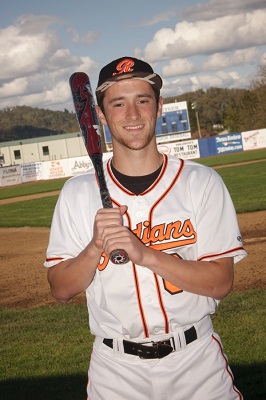 Tristan was born and raised in Douglas County attending East Primary in Sutherlin before transferring to Hucrest Elementary in Roseburg. He then went on to Joseph Lane Middle School and Roseburg High where he played football and baseball during his freshman year. As a sophomore, Guillen decided to focus on baseball and made the varsity club for three consecutive seasons, including the last two as a starting outfielder.

"I played on three good teams, unfortunately we got stuck in the semifinals every year," Tristan said. "My junior year was a lot of fun because I was able to play with guys like Josh Graham, Jared Priestley, Connor Newell and Mike Morin."

During the spring of 2013, Guillen hit .389 and led the team in extra base hits earning him first team all-conference honors. The Indians also made it back to the Class 6A semifinals and Tristan was named to the all-state first team.

"I had signed with Clackamas Community College early, so I was able to just go out and have fun and lay it all on the line," Guillen said.

Guillen will be busy playing the sport he loves all summer long after earning a starting spot on the Dr. Stewart's 'AAA' American Legion baseball team. Then, it's off to Clackamas Community College in Oregon City in the fall where he will play baseball and focus on earning a degree in international business.