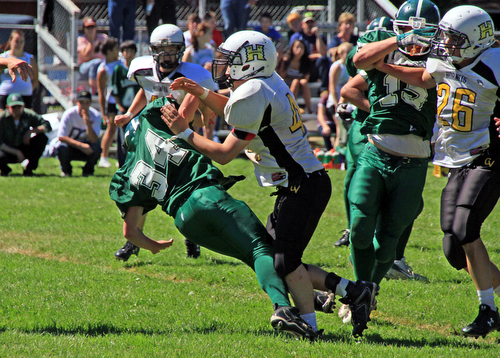 It's a rarity for a high school athlete to participate in a state championship contest, but this Camas Valley football player has the chance to play in four title games in four years. Douglas County Sports Online shines the Avista Athlete Spotlight on senior Matthew Thompson.

Matt grew up in Douglas County attending school at Tenmile Elementary before transferring to Camas Valley after the grade school closed down in 2004. Six years later, Thompson would suit up for his first varsity football game as a Hornet. The 2010 team made it all the way to the Class 1A championship game before losing to St. Paul 22-8. Over the next two seasons, Matt played linebacker on a pair of undefeated Camas Valley teams winning the 2011 title game in decisive fashion 66-22 over Perrydale. The 2012 campaign saw the Hornets stretch their winning streak to 27 games capping it off with a 24-8 victory over St. Paul.

"This is my final season and it would be great to three-peat," Thompson said. "If we can get back to the title game, I was told I may be the only player in Oregon to ever start in four consecutive state championship games."

"I started coaching Matt in YMCA basketball when he was six years old and I nicknamed him 'trainwreck' because everywhere he went somebody or something was going down and to be honest not much has changed," head coach Eli Wolfe said. "He's competitive and all about winning, plus he's one of the smartest kids I've ever coached."

The 2013 Camas Valley Hornets look to be the elite team in Class 1A, but depth could be a factor as they work their way through a tough, eight-game league schedule.

"We lost three starters, so we're having to play more on both sides of the ball," Matt said. "But this senior class is pretty tight and we just have to come together chemistry wise."

Thompson won't be done competing anytime soon because he also plays basketball and track for the Hornets and is a member of the Douglas High School baseball team.