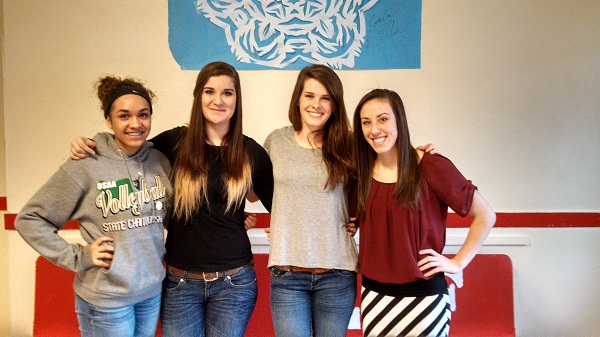 Days Creek High School has an enrollment of just over 80 students, but the lack of numbers hasn't stopped the volleyball program from becoming one of the most envied and successful in the entire state. In 2010, local fans got their first glimpse of a freshman class that would help guide the Wolves to a sixth place trophy at the 2A state tournament.

"The four of us starting playing together in the sixth grade," outside hitter Juniper McDonald said. "We gained a lot of experience during the summer between our 8th and 9th grade years after the coaching staff placed us on a club team that traveled to tournaments all around."

One year after getting their first taste of state tournament action, it didn't take long for this group to reach its ultimate goal of winning a 2A championship. Days Creek took home the 2011 title with a 25-23, 25-21, 26-24 win over Portland Christian.

"Going into our freshman season, we knew we were going to be good," middle blocker Stevielee Jansen said. "Our inexperience showed at the tournament, but coming back for our sophomore season we had one goal and we were able to achieve it."

"We improved a lot in the offseason by playing against upper level teams like Roseburg (6A) and Hidden Valley (4A)," Isabel Golemon said. "We had really strong leaders and we competed against each other every day in practice."

Heading into the 2012 campaign, the Wolves were focused on getting back to the finals and winning a second straight state championship. However, things didn't go as planned when Culver upset Days Creek in the 2A finals.

"Culver was a good team, but I really felt like we beat ourselves," Jazmyn Herrington said. "We definitely wanted to play them again and we were lucky enough to meet up in the (2013) semifinals."

The senior-dominated Wolves cruised through the 2013 Mountain View Conference schedule finishing with a perfect 14-0 record. After a playoff victory over Vernonia, Days Creek was back at the state tournament for the fourth consecutive year. A day one win against Portland Christian set up a rematch with Culver and the Wolves were up to the task beating the Bulldogs 25-22, 25-10, 25-16.

"It wasn't the state championship, but it sure felt like it," Herrington said.

"Last year's loss break didn't break us confidence-wise and we wanted to show them (Culver) that we were the better team," Jansen said.

The following night Days Creek went on to beat Reedsport to win its second title in three years.

Golemon capped off the season by being named the 2A Player of the Year and was joined on the first team by (Stevielee) Jansen. McDonald and Herrington earned second team all-state honors.

"It was never a goal of mine to be player of the year," Golemon said. "I always strived to be the best volleyball player I could be and winning the award was icing on the cake."

Isabel, who finished her prep career as a first team all-state selection for three straight years and a two-time conference MVP, will continue her playing career at Southern Oregon University in Ashland. Jansen and Herrington are headed to Simpson University in Redding, California and McDonald will play volleyball at Northwest Christian University in Eugene.

*The class of 2014 had a total of nine volleyball players including teammates Emily Hopfer, Rachel Ellis, Markelle Owens, Elisa Moore and Katie Michaels.