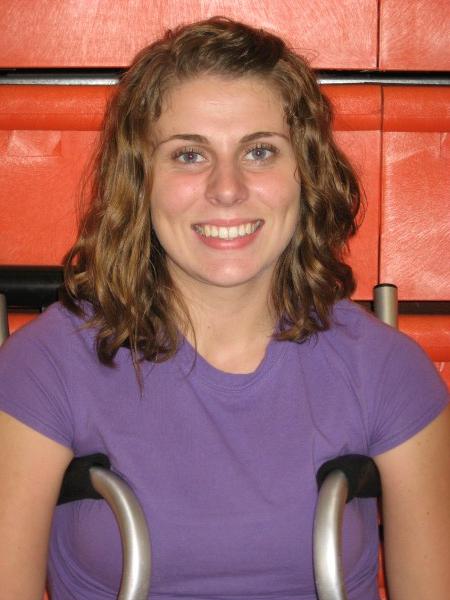 This talented Roseburg High School athlete has continued to play an intregal part in her volleyball team's success despite having her senior season cut short because of a serious injury.

Cadee Kinne is one of only three seniors on the Indians' squad and has helped lead Roseburg to a 7-2 record in the Southwest Conference and a likely spot in the 6A state playoffs. Through the first half of the season, Cadee started at outside hitter and led the team with a service percentage of 96.

"Cadee brought stability to this team," RHS head coach Bruce Myers said. "You always knew she'd be in the right spot at the right time and make the right play."

Kinne is also a two-year starter for the Roseburg softball team earning Honorable Mention honors both her sophomore and junior seasons. In fact, it was during the Indians' run to the 2008 state championship game when Cadee first injured the foot, but she continued to play despite the nagging pain. After resting during the summer, Cadee reaggravated the injury midway through the volleyball season.

"I went to the doctor and found I had a broken bone in my right foot," Kinne said. "The operation took place October 13 and the surgeon had to put two screws in the foot and do a bone graph."

Kinne is the second player to be lost for the season due to injury, but still the Indians continue to perservere winning their last six conference matches.

"The team has lost two of its three senior captains and it's made things tougher," Cadee said. "But thanks to the younger players and the addition of Bre Thomas, the team has played really well."

Kinne's volleyball career at Roseburg High School is over and her senior softball season is also in jeopardy, but she somehow continues to stay positive despite the setbacks.

"It's disappointing, but I knew I'd have to deal with it eventually," Cadee said. "I'm out for the next four to six months and hopefully, I'll be ready to go by next spring."