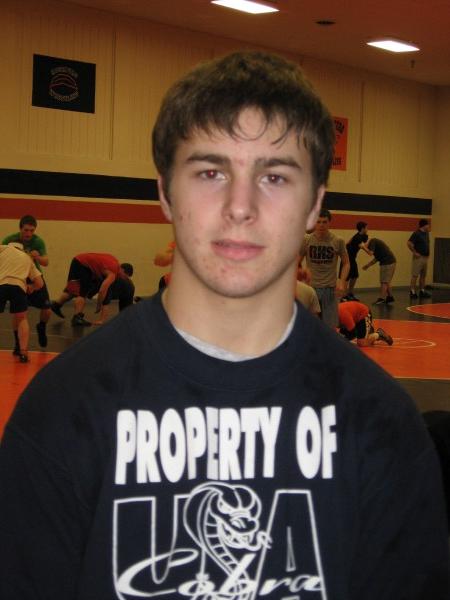 This Roseburg High School student-athlete has already achieved more in one year of wrestling than most athletes do in their entire careers. Defending state wrestling champion Seth Thomas is Douglas County Sports Online's latest Athlete Spotlight.

Sophomore Seth Thomas is not your typical Roseburg athlete. He grew up in Douglas County, but attended both elementary and middle schools in Myrtle Creek. That's also where he decided to take up a new sport called wrestling.

"I was six or seven years old and I fell in love with it right away," Thomas said. "To be honest, I really didn't have much success until a few years into it."

By his freshman season, Seth decided to transfer to Roseburg High School and continue his career under the tutelage of Indians head coach Steve Lander. RHS was also coming off a 2007 state championship, the schools first since 1974. Thomas had a solid freshman year and qualified for the state tournament. That's when the 15-year old did the unexpected and pinned the number one seed in the quarterfinals.

"I was down 2-0 most of the match, but I finally got to him in the third round," Thomas said. "I locked him in a cradle and was able to pin him."

Thomas went on to win his final two matches by decision and capture the 130lb title. His efforts on the mat also helped lead Roseburg to its second consecutive team championship. This season, Seth is wrestling at 140lb and has already gone up against some of the best wrestlers in the country during a trip to The Clash Wrestling Meet in Minnesota. Last summer, he also competed at the national level finishing third in both Greco-Roman and freestyle.

"He's very serious about his wrestling and showed it this past summer by spending a lot of time and energy in getting better," Roseburg head coach Steve Lander said. "Seth is a super kid, he has a 4.0 GPA and he also gives 100 percent in the classroom."

The 2009 season is well underway and the Roseburg High School wrestling team looks poised to win a third consectutive state championship. Seth Thomas will play a huge role in trying to help the Indians reach that goal, but he also hopes to achieve the same success he had in 2008.

"Last year, I watched as a lot of my friends won for the first time as juniors and seniors and I was able to get mine as a freshman," Thomas said. "I definitely want to win four state titles."