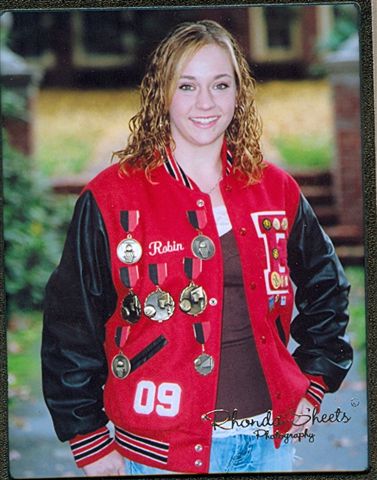 Elkton High School is a tiny, 1A school with an enrollment of just over 60 students, but it's also home to the 2008-2009 Skyline League Player of the Year in both volleyball and girls basketball. Douglas County Sports Online honors Robin Whipple as the latest local standout to shine in the Athlete Spotlight.

Whipple recently completed a prep career that seemed to last a lifetime. She played four years of varsity basketball and softball, plus was a three-year starter in volleyball. Robin was a first-team, all-league performer in basketball and volleyball the past two seasons and received honorable mention honors this past spring in softball as an outfielder. To top it off, she was named a two-time, 'Player of the Year' after leading the Elks to the postseason in both volleyball and basketball.

"I think basketball stands out the most, since it was the longest season, it was physical and nobody picked us to win," Whipple said. "We were shaky early, but we came around quickly and went on to win the district title."

Robin was one of only two seniors on the Elks' basketball team and was the only 12th grader on the volleyball court. If that wasn't tough enough, she was also coached by her mother, Samantha.

"It was a lot fun, but we had our difficulties," Robin said. "We went to each other for advice, but it was definitely a coach-player relationship."

"She's the type of player that you want five more of on the court, but as a mom, you want only one," Elkton volleyball coach Samantha Whipple said laughingly.

After guiding the volleyball team into the state playoffs, Robin continued her outstanding senior year as a key part of the Skyline League champion Elkton basketball team. She led the club in
scoring (9.5ppg), rebounding (7.9rpg) and field goal percentage (48.9). Whipple wrapped-up her playing days as a starting outfielder on the North Douglas High School softball team, which finished near the bottom of the District 2 standings.

"Softball is actually my favorite sport, even though it's my weakest," Robin said. "I really enjoy being outside, sliding, diving for softballs and getting dirty."

Her playing days may be over, but Robin Whipple has definitely left her mark in Elkton and the future of the girls' programs look very bright. She will attend Chemeketa Community College in Salem this fall with plans on majoring in Forest Management.