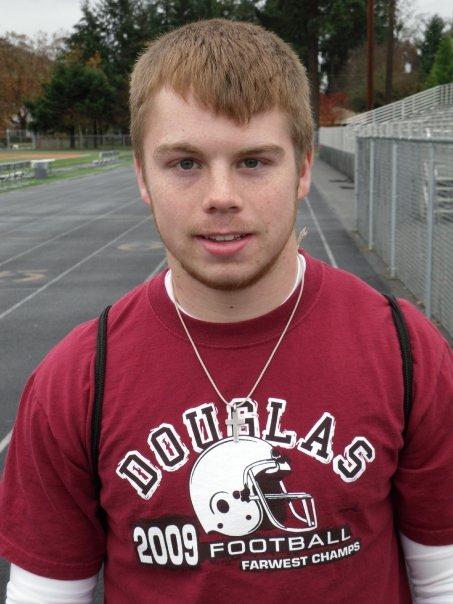 In just one year, this talented football player has gone from an injury-plagued junior season to the Far West League's offensive player of the year. Douglas County Sports Online is proud to shine the Avista Athlete Spotlight on Douglas senior Jered Stoffal.

From a young age, Jered dreamed of one day wearing the crimson and gray of Douglas High School. As a freshman, the Tenmile native achieved that goal when he was named the starting shortstop for the varsity baseball team.

"I grew up watching my brother (former Douglas standout DJ Kooken) play and I was even a ballboy for the football team," Stoffal said. "It was exciting to play as a freshman because I've always wanted to be a pro baseball player."

This fall, Jered also made his mark on the football field. He was recently named the Far West League's most valuable player after rushing for nearly 1500 yards and 20 touchdowns. He was also an intregal part in leading the Trojans to their second straight FWL title.

"Jered is an inspiration for our team," head coach Joe Polamalu said. "He had knee problems last season and to see him break out this year has been great."

If you think Stoffal is one dimensional, you'd better think again. The 5'7" 160 pound senior was also named a first-team performer as a defensive back.

"He has non-stop energy and intensity," Polamalu said. "Jered is highly competitive and he's a great leader and those are things you just can't teach."

Stoffal won't get much of a rest once the football season comes to a close because he will immediately begin preparing for his final year of high school baseball. Jered is a two-time all-league infielder and last season, he was a second-team all-state selection.

Stoffal has also been a key member of Dr. Stewart's American Legion baseball program for the past two seasons. Last summer, he was the starting third baseman and helped the Doc's qualify for the state tournament.

"I plan on playing legion ball this summer and I'd like to continue into college," Stoffal said. "I really want to go to Western Oregon and play baseball."