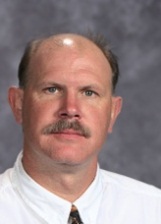 Over the past decade, Oakland High School has been home to one of the most successful boys basketball programs in the state of Oregon. Douglas County Sports Online is proud to honor Oaker head coach Jeff Clark as its latest DC Great.

Clark was a standout basketball player at Sutherlin High School averaging a state best 26.5 points per game as a senior. He was also named the Sky-Em League's most valuable player and a first team all-state selection during the 1987-88 campaign.

"We finished 20-0 during the regular season and won the first two games at the state tournament before losing our point guard to an injury," Jeff says. "It turned out to be too much to overcome and we ended up losing the next two games."

The 6'9" center continued his basketball career in college earning a scholarship to Idaho State University. After one season in Pocatello, he transferred to Western Oregon University playing his final three years in Monmouth.

In 1994, Clark became the head basketball coach at Oakland High School and has held the same position for the past 18 years. His teams have made it to the state tournament in 10 of their 13 playoff appearances and have taken home eight trophies, including two state titles.

"The 2000 season was one of those storybook years where we went 30-0 and held our opponents to just 27 points per game," Jeff says. "I had three incredibly talented guards in Jordan Humphreys, Blaine Bartholomew and Brett Crane, plus a great post player in Jason Simmons."

The following season was more of the same for Oakland as the 2000-2001 team stretched the Oakers' winning streak to 56 games and in 2006, Oakland would head back to the state touranment in Pendleton and capture another 2A championship.

"The '06 team finished as league co-champs and had to win a pair of games just to get to the tournament," Clark says. "We were able to upset a very good Western Mennonite team and beat Santiam Christian in double overtime to win the title."

Jeff, who also serves as the school's principal and athletic director, is now in his 18th season with the Oakers. This year's group may not have the same level of talent as some of the Oakland teams of the past, but the head coach likes what he sees.

"The kids have bought into our defensive philosophy and they work really well together," Clark says. "There are six or seven teams in the conference battling for five playoff spots and our goal is to get back to the postseason."