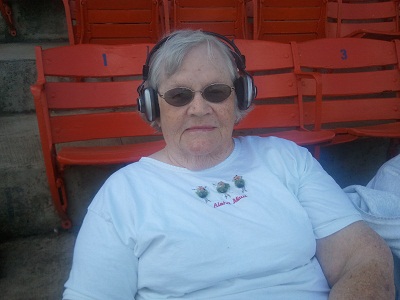 For the past 30 years, there has been no fan more dedicated to Roseburg High School athletics and local American Legion baseball than our next DC Great. Douglas County Sports Online is honored to recognize Irene Hanna.

Irene (Downing) moved with her family to Douglas County at the age of 11 and would go on to graduate from Sutherlin High School. Three years later, she made her way to Roseburg, married and started a career with the U.S. Forest Service. However, it wasn't until after the death of her husband in 1981 that she met her good friend Bessie Shaw and began attending local sporting events on a regular basis.

"We started going to girls basketball games at Roseburg High School because they didn't have too many fans and we wanted to support the program," Irene said. "From there we branched into boys basketball, baseball and football, but Bessie wasn't into wrestling."

Over the next 25 years, the pair became a fixture at Finlay Field, Stewart Robertson Memorial Gymnasium, Legion Field and other local venues in Douglas County. They watched hundreds of games together, but some were definitely more memorable than others.

"The one that stands out is when the Docs beat Eugene to win the regional title and go to the 1984 American Legion World Series," Hanna said. "It was one of the most exciting games I can remember."

Irene and Bessie were more dedicated than most sports fans and proved it by traveling to road games and supporting their favorite teams away from the friendly confines of Douglas County.

"Some of the most fun we had together was going out of town," Hanna said. "We would plan the trip around the game, spend the night and make a mini vacation out of it."

Sadly, Bessie passed away in 2006 and left her friend at a crossroad in her life on whether or not to continue attending local games. After some thoughtful consideration, Irene decided to keep doing what she loves and is still a Roseburg High football and American Legion baseball season ticket holder to this day.

"I was lucky enough to find some new friends that were willing to go to the games with me." Hanna said. "Once in a while, Bessie and I would go to watch Douglas play, but I haven't attended any games in Winston since she passed away."

If you plan on heading out to Legion Field this summer, make sure to keep an eye out for Irene sitting in her usual seat in the reserved section behind home plate. Just look for the woman clad in blue and orange, holding a scorebook in her lap and listening attentively to the radio broadcast on her headphones.