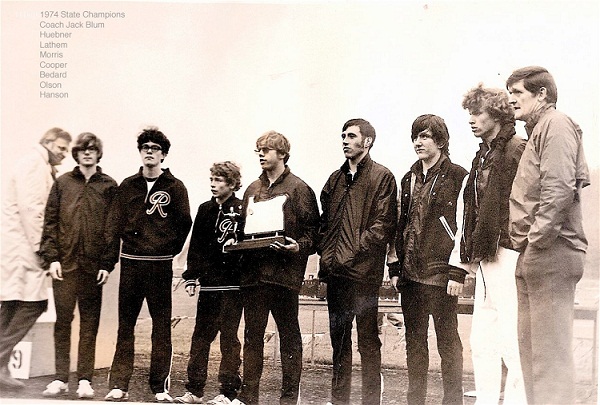 You rarely, if ever, hear the term cross country dynasty but that's exactly what took place more than 50 years ago at Reedsport High School. Douglas County Sports Online is honored to recognize Jack Blum as its latest DC Great.

Jack was born in Kansas City, Kansas and went to school in Oregon graduating from Coquille High School and Linfield College in McMinnville. He did a number of things in his professional career including teacher, insurance agent and owner of a landscape and nursery business. He was also a coach and would become one of the most successful cross country coaches in the state's history.

Blum led Reedsport High School to the state championship in 1960, 1961, 1962 and 1974. The Braves also won the title in 1963 under Harlin Millikin. Under Jack's guidance, Reedsport runners took home the state's individual crowns for three consecutive years with Lynn Faircloth ('61) and Gene Faircloth ('62-'63).

Bob Huebner was a member of Blum's last state championship team and spent a lot of time around his former coach working summers in his landscape business. Over the years the pair became great friends and Huebner recalls some of his fondest memories.

"Jack utilized the local sand dunes as the ultimate training grounds," Bob said. "I recall grueling practices on the dunes and he would follow along in his yellow jeep keeping a watchful eye and yelling pace times to us."

The fall of 1971 was Huebner's freshman season and it was Blum that would mold a group of young, inexperienced runners into state champions just three years later. That journey began with a seemingly uneventful trip to an early season meet near Salem.

"As we passed through Eugene Jack detoured to the U of O campus claiming he had to grab something, so he pulled the station wagon in front of a fraternity house and disappeared inside," Bob recalls. "Moments later he re-emerged with Steve Prefontaine who calmly threw his duffle into the back of the wagon and plopped down next to me." "He rode with us to the meet and when we arrived in front of 200 other runners we were rock stars."

In 1974, Jack Blum and the Reedsport Braves would capture the school's fifth cross country state championship.

"Coach knew how to inspire kids to excel," Huebner said. "You just wanted to please the guy."

Jack eventually left coaching, retired and moved to Eugene. He died January 30, 2011 of complications from Alzheimer’s disease. Blum was 81.