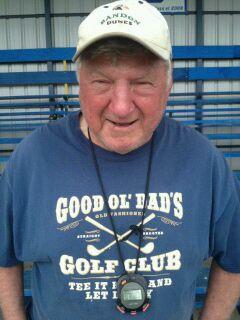 It's not often a head coach makes the transition from the hard-nosed game of football to the sport of cross country. Douglas County Sports Online honors Maynard Mai as its latest DC Great.

Maynard grew up in Russell, Kansas and graduated from Bethany College in Lindsborg before making his way west, teaching for six years at Malin High School outside of Klamath Falls. In 1970, the math teacher accepted a position in Glide and became the school's head football coach. He would stay with the program for three years before a new opportunity came his way.

"I also was the head track coach at the time, so the athletic director asked if I'd be interested in coaching the cross country program," Mai said. "Even though I was drafted into the job, I ended up really liking it."

He liked it so much he stayed in the position until 2002. In that time, Maynard led a pair of girls' teams to second place finishes at state ('80 and '95), plus a state runner-up finish for the 1996 boys team. He also coached Tracy Garrison who went on to win the state's individual title in 1981.

"I remember the time Tracy left a school dance early because he wanted to get some training in," Mai said. "He was running around the track in the pitch dark before some of his classmates came outside and turned on their car headlights." "He ended up running 11 laps while his friends cheered him on."

Maynard stepped down from the track and field job in 1990 and retired his cross country post in 2002. A few years later, Mai was recognized by the school when the annual Glide Invitational was renamed in his honor.

"A few people talked to me about doing something for Maynard because he's had his hands in the program for so long," track and field head coach Randy Gould said. "I agreed with the proposal and changed the name to the Maynard Mai Invitational. "He's a great guy and is deserving of everything he gets."

"It was a surprise to me because when I came out to the track some of the kids walked up and asked me to sign their programs," Maynard said. "They had a big sign and balloons and they wanted me to speak, but I declined."

Glide High School no longer has a cross country program, but Mai hasn't left the community or profession that he has grown to love.

"I'm a volunteer coach with the track team and work mainly with the hurdlers," Maynard said. "I still enjoy being around the kids."

Mai and is wife of 51 years, Lois, raised two children.