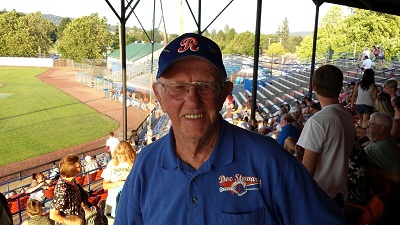 Each summer a new crop of athletes suit up for Roseburg's triple-A American Legion baseball team, but there is one constant local fans will see roaming around Legion Field. Douglas County Sports Online honors commissioner Don Severson as its latest DC Great.

Don, a Minnesota-native, saw Oregon for the first time when he traveled here to visit his parents who had relocated to the Beaver state. After spending time in the US Air Corps, he decided to move to the pacific northwest and attend the University of Oregon in Eugene. Severson graduated from the U of O and became a school teacher retiring from the Roseburg school district in 1983 after 31 years of service.

"I was also the head baseball coach at RHS for 14 years and spent four seasons as the head coach for the legion program," Don said. "Before that I was an assistant coach for 10 years under (former legion head coach) Bill Harper."

"I coached a bunch of talented players and some really good teams, but never did win a state title during those years," Don said. "Klamath Falls had some great ballclubs in that span and won three consecutive state championships."

During his tenure at Roseburg High, Severson led the 1971 Indians to the AAA semifinals before losing to eventual state champion Corvallis.

Don did take some time away from the legion program before being elected as a commissioner in the 1990's and today, at the age of 90, he also holds the title of manager for one of Roseburg's single-A teams.

"I've been a commissioner for about 15 years and I plan to stay with it as long as I can," Severson said.