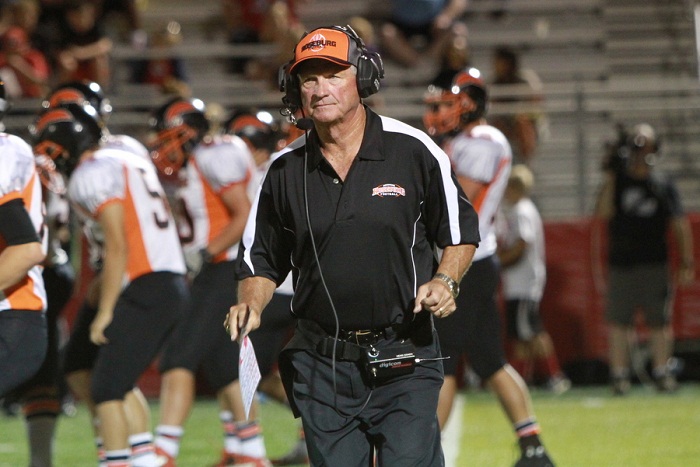 When the high school football season officially opened August 17, there was a familiar figure standing on the turf at Finlay Field in Roseburg. Douglas County Sports Online is proud to honor head football coach Thurman Bell as its latest DC Great.

The 2015 season marks Bell's 45th and final year as the head football coach at Roseburg High School. He is the all-time leader in wins at the Class 6A level in Oregon and among coaches in every classification, Bell ranks second behind only Dayton’s Dewey Sullivan.

"I'm a seasonal coach and I don't do it year round and that's why most of the younger coaches burn out after 10 or 12 years," Thurman said. "Once the season ends, I don't do anything football related until the first Monday in July when we start our summer skills program."

Bell's career record at RHS sits at 330-147-1 putting him 22 victories away from tying Sullivan's all-time mark of 352 wins and that means the 72-year old will fall short of the record.

"At one time, (breaking Sullivan's mark) was a consideration, but the betterment of the program is the important thing. I can't do this forever,” he told the Portland Tribune.

During his tenure, the Indians won big-school state titles in 1981, 1990, 1995 and 1996 and finished as runner-up five times. However, it's been 17 years since Roseburg’s last journey to the OSAA finals losing the 1998 title game in overtime to Ashland.

“It’s a lot tougher to get to the championship game today because coaching around the state has greatly improved,” Thurman said. “In the past, there were only an isolated few, but now the competition is much better.”

The 2015 Roseburg Indians could be the team that leads Bell back to the finals for the tenth time in his career, but whether the Indians win the state championship or not, you can bet Thurman Bell will be remembered as one of the greatest coaches in the history of Oregon high school athletics.

"I've had four opportunities in my career to move on to the college level and I've never regretted my decision to stay at Roseburg," Thurman said. "I've always felt coaching high school football is my niche and feel lucky that I was able to find something I love to do."