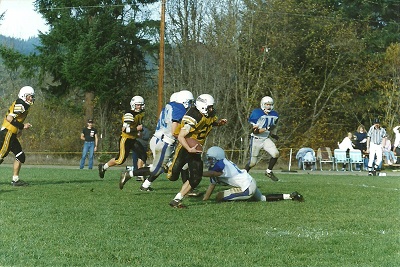 It's not uncommon for a former high school athlete to end up coaching at his or her alma mater, but it is a rare feat when that person is able to win a state championship as both a player and coach. Douglas County Sports Online salutes Camas Valley head football coach Eli Wolfe as its latest DC Great.

Eli grew up in the rural, tight-knit community of Camas Valley and one of his fondest memories was watching his cousins, Scott and Richard, play football for the Hornets. He idolized local athletes like former runnning back Shane Walker and knew from a young age that he too wanted to play football for his high school team.

"I would go to home games and play in the back of the endzones just like the kids do today," Wolfe said. "When I was a seventh grader, my friend and I took the rooter bus to St. Paul for a playoff game and I remember Travis Hunt was our running back, Pete Dancer was a freshman on that team and we lost 36-6. I can tell you the scores of games, places they were played and even the numbers of the players. History, tradition and pride has always meant something to me and it always will."

Eli's lifelong dream of wearing the black and gold finally came true in 1989 when he made the varsity football team as a freshman. He started one game that season as the Hornets went 9-0 before losing to Alsea in the state semifinals. The following year Wolfe would become the team's starting quarterback, but struggled in the classroom and was ineligible for three games because of grades.

"I wasn't fond of school and sports is what kept me motivated," Eli said. "Football helped me to do the right thing and I was lucky to have a great mentor in Coach (Bob) Phelps and he deserved a lot of credit for keeping me focused." 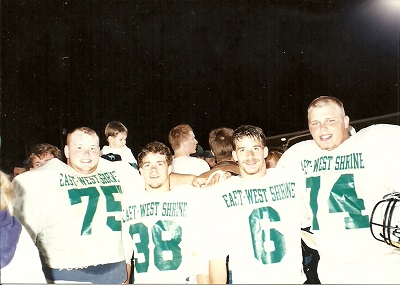 "Eli was in one of my classes and failed to turn in some work, so I suspended him from the team," former head coach Bob Phelps said. "He didn't think I would do it, but I remember him telling me later that it was the best thing that happened to him because he suddenly realzied he couldn't do only what he wanted to do."

The hard work and determination would pay off as the Hornets qualified for the state playoffs despite losing a pair of games during the regular season. Camas Valley shut out Alsea 34-0 in a rematch of the previous year's semifinal game and avenged an earlier season loss to league opponent Butte Falls with an 18-8 win over the Loggers. The Hornets capped off the year with a 26-6 victory over Prairie City in the state title game at Parker Stadium in Corvallis.

"Eli had good speed, he was feisty, a great hitter and wouldn't back down," Phelps said. "He was also a natural leader, but he respected the older kids and he earned their respect by outplaying everybody on the field."

Wolfe's final two seasons of football were both successful, but ended exactly the same with Camas Valley suffering semifinal losses to the St. Paul Buckaroos. After his senior year, he was named first team all-league at three different positions including quarterback, linebacker and kicker.

"I never played football in college, but I did get to suit up four more times," Eli said. "In March of 1993, I went to England and played two games for the Oregon All-Stars and I played in both the 8-man All-Star game and the Shriners game."

Seven years after graduating from Camas Valley, Eli was hired as the school's head football coach and given the monumental task of turning around a once successful program. Prior to his arrival the Hornets played just 1 1/2 games before being forced to forfeit the season due to a lack of players.

"My first team consisted of nine freshman and three sophomores and I committed to coaching the freshman group until they graduated," Wolfe said. "I kept my word, but shortly after I resigned one of my former players, Tyler Plikat, was killed in a car crash and that tragedy made me realize how much the kids needed me and how much I needed them, so I decided to stay on and coach." 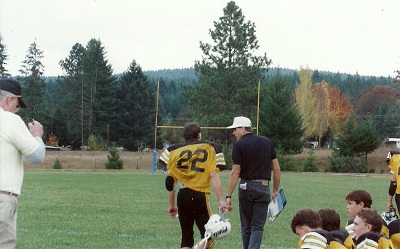 Fifteen seasons after it began Eli has built a mini-dynasty in Camas Valley leading the Hornets to three state championship games during his tenure and winning titles in 2011 and 2012. Wolfe credits the success to a dedicated wife of 20 years, a great community and to his longtime assistant coaches Pete Dancer and Chad Bachmeier. 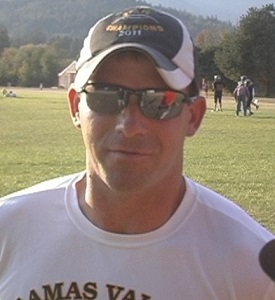 "We've gone through some tough times with only eight kids on the roster and losing every game to dominating the state and winning a title," Eli said. "Our team has been honored at the state capital, I've spoke at an 8-man football clinic in Montana and had the opportunity to talk with youngsters at 13 area schools."

The 2014 season marks Eli's 15th year as the school's head coach making him the second longest tenured football coach in Douglas County behind only Roseburg's Thurman Bell. Wolfe has also coached two of his sons, Eli ('13) and Kai ('15), with youngest son Bryson ('18) heading to the Camas Valley campus next fall.