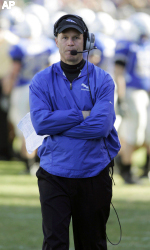 This 1985 graduate is today one of the most sought after young coaches in college football. Since leaving Douglas County, Troy Calhoun has been a Division I college quarterback, an assistant coach at both the collegiate and professional levels and now, he has become only the sixth head football coach in school history at the Air Force Academy in Colorado Springs, Colorado.

grew up in and by his sophomore season was a standout athlete for the Indians. The three-sport star played football for longtime Roseburg head coach Thurman Bell from 1982-84, receiving first-team all-Southern Oregon Conference honors at quarterback during his senior season.  In his final year, Calhoun passed for 1,040 yards and ran for more than 300 yards while leading the Indians to an 8-2 record. He also played basketball and baseball for and was an integral part of the 1984 Doctor Stewart’s American Legion baseball team that made it all the way to the Legion World Series. After a successful high school career, was accepted to the Air Force Academy where he played four years for the Falcons’ football program, eventually being named the starting quarterback during his senior campaign.

In 1989, Calhoun tried his hand at coaching as a graduate assistant with Air Force. He got his big break with Ohio University where he served as Quarterbacks coach and then Offensive Coordinator from 1995 through 2000. Troy’s success landed him the same positions at Wake Forest the following season and then, it was off to the NFL. Three years as an assistant coach with the Denver Broncos and one season as Offensive Coordinator for the Houston Texans.

In 2007, Troy’s alma mater came calling and he went back to the college ranks taking over for the Air Force Academy’s legendary coach Fisher DeBerry. In his first season, Calhoun was named the Mountain West Conference “Coach of the Year” and was one of eight finalists for national “Coach of the year” honors. , a married father of two, has no immediate plans on leaving the Academy after inking a deal that will keep him at Air Force through 2012. Calhoun got the 2008 season off to a winning start August 30 as the Falcons beat up on , 41-7.

It’s easy to see why Troy Calhoun is one of ’s greatest ever!