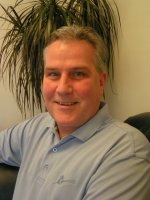 This 1974 graduate of South Umpqua High School was an all-state athlete in three sports and helped lead the Lancers baseball team to the 1973 state championship. His exploits on the playing field also earned him a spot on South Umpqua's "Wall of Fame".

Marc Holt was an outstanding athlete in football, basketball and baseball during his years in Tri City. During his junior season in baseball, Marc played pitcher/shortstop for SU and hit an impressive .425 as the Lancers cruised to a 27-3 record and the 2A state title.

"I remember how tough it was just to make the playoffs," Holt said. "Back in the 70's, only the league champions would qualify, so a lot of good teams were left out."

Holt started at safety during his junior year in football and the Lancers made it all the way to the semifinals behind legendary quarterback Pete Rowe. Holt took over the quarterbacking duties in 1973 and threw 19 touchdown passes as a senior, but South Umpqua was upended in the state quarterfinals.

"We were ranked number one in the state all season long in both football and baseball," Holt said. "We were a very talented group of seniors, which included guys like Rob Petterson, Byron Guthrie, Tim Rust, Tom Kuntz and Tim Bare."

Despite all of his successes in football and on the diamond, Holt's first love has always been basketball. Marc was a three-year starter for South Umpqua and finished his career as the school's all-time leader in points. After graduation, Holt was drafted by the San Francisco Giants, but opted to play college basketball at the University of Arizona. After one year in Tucson, Marc transfered to Umpqua Community College. In his only year at Umpqua, Holt led the nation in free throw percentage making 98 of 104 attempts from the line.

"That year, Dan Withers had started the UCC baseball program, so I was actually able to play two sports," Marc said. "After my one season at Umpqua, I received a full-ride scholarship to play basketball at Boise State."

Once his playing days were over, Holt came back to Douglas County and tried his hand at coaching. He was a varsity boys basketball assistant for seven years at Douglas High School, before spending three seasons as the junior varsity head coach at Roseburg. Marc currently lives in Bend, where he works as a Builder Developer Specialist for AmeriTitle.

"A few years ago, I helped out the girls varsity basketball team at Mountain View High School, but I haven't coached for a while," Holt said. "It's very time consuming, plus it's difficult being an off-campus coach."

It's been more than 30 years since Marc Holt played in front of packed stadiums in Tri City, but longtime South County sports fans still remember the great players and teams of his generation.

"A lot of the credit has to go to the tremendous coaches we had like Kent Wigle and Dan Withers," Holt said. "But, those were defintiely some great teams and some really fun times."