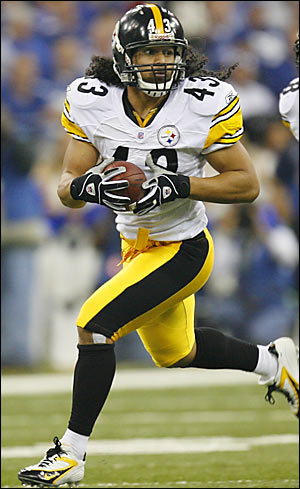 This two-time Super Bowl winner called Tenmile, Oregon his home for eight years and became the area's most popular sports figure to ever come out of Douglas County. Troy Polamalu, a 1999 graduate of Douglas High School in Winston, is being honored as Douglas County Sports Online's latest DC Great.

Polamalu grew up in Southern California but moved to Oregon in the early 1990's to live with his aunt and uncle where he attended elementary, middle and high schools in Douglas County. At Douglas High, he played varsity football as a freshman rushing for 430 yards, five scores and had two interceptions and was named to the 1995 All-Far West League second team. As a sophomore, he ran for 1,003 yards, had 340 receiving yards and scored 20 touchdowns, plus picked off six passes while making the All-Far West League first team as a running back and second team as a defensive back. As a junior in 1997, Troy rushed for 22 touchdowns and 1,040 yards and hauled-in eight interceptions. Polamalu was named the All-State and All-Far West League Offensive Most Valuable Player. He played in only four games of his senior season because of injuries, but still rushed for 671 yards and nine touchdowns and was named an All-Far West League second team performer. Troy was also an All-State centerfielder in baseball and was twice named All-league first team in basketball. Polamalu also was a starting outfielder for the Dr. Stewart’s American Legion baseball team.

After a stellar prep career, Troy was recruited by Oregon, Oregon State, Illinois, Washington, Washington State, Stanford, Colorado and  Southern California. Eventually, it was his family who had a part in bringing him back to Southern California to play football at USC. He was a 2000 All-Pac-10 honorable mention pick as a sophomore and in his second season as the starting strong safety, he was named to the 2001 Football Writers All-American first team. He would earn the same honor in 2002 from both the Football Writers and Associated Press.

Following a successful collegiate career, Polamalu became the Number 16 selection in the 2003 NFL draft and was the first safety picked in the first round. And true to form, Troy's professional career has been just as successful as his prep and college playing days. He has won two Super Bowl rings, including the 2009 championship as the Steelers beat Arizona 27-23 to win Super Bowl XLIII. Polamalu has also earned five straight trips (2005-09) to the NFL Pro Bowl game.

Troy currently resides in Southern California and is married with one son.