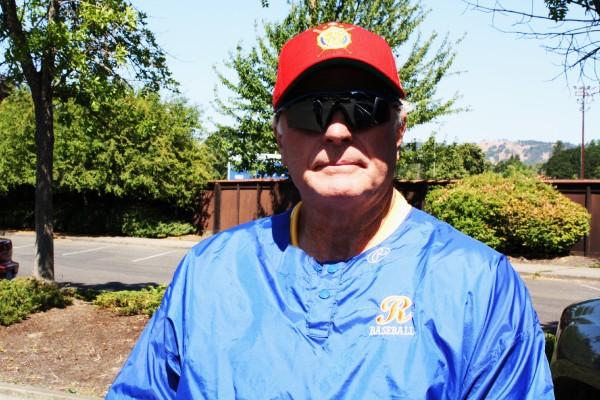 Our latest honoree has built quite a resume over the years as a standout high school and college athlete, a state championship prep baseball coach and one of the winningest coaches in the history of local American Legion baseball. Douglas County Sports Online congratulates Rod Trask as the latest DC Great.

Rod was a three-sport athlete at Myrtle Creek High School where he played football, basketball and baseball for the Vikings. He was an all-conference halfback on the gridiron and a three-year starter in both baskeball and baseball, as well as an all-state performer in both sports during his senior season.

"I was lucky enough to play baseball for Frostie Loghry and he led us to the state title game my sophomore year," Trask said. "We also twice made it to the state tournament in basketball, but never took home a trophy."

After high school, Rod headed to Oregon State on a baseball scholarship and played for the Beavers' program for three years. During one season as a starting outfielder, OSU was ranked sixth in the national polls before losing to eventual champion Southern California in the regionals.

"We had some good teams in Corvallis and I have some great memories during my time there," Trask said. "I played against some future major league Hall of Famers including Reggie Jackson and Tom Seaver."

Rod earned his degree from Oregon State and would find his way back to Douglas County, where he became a teacher and coach at South Umpqua High School. In 1970, he took the head basketball job and was part of an impressive trio of coaches that included Kent Wigle (football) and Dan Withers (baseball).

"I had some success during my two seasons with the program," Trask said. "We actually became the first South Umpqua team to make it to the state tournament."

In 1973, Rod resigned his teaching position to pursue other interests, but it would be a coaching opportunity that would eventually bring him back to the profession. It happened when former SU colleague Dan Withers was hired to start the baseball program at Umpqua Community College and he asked Trask to join his staff.

"We built a successful program at Umpqua, including one team that went to the Junior College World Series," Rod said. "Unfortunately, the program was disbanded a few years later."

Trask would eventually land at Douglas High School in Winston where he would stay until 2000. In 1992, he became the Trojans head baseball coach and would keep the position for 10 successful seasons. Under his leadership, Douglas made the playoffs every year, including two trips to the state semifinals and one state title.

"I had two top-notch pitchers in '92 including Kevin Shaffer and Lance Headquist," Trask said. "It was great to win the championship, but I'm most proud of the fact that we never missed out on the postseason during my tenure."

Rod's success with the Trojans' baseball program did not go unnoticed in Douglas County. In 1994, the local American Legion baseball commission named him the eighth coach in the history of the Dr. Stewart's program. Trask would coach the Docs through the summer of 1998 compiling a record of 178-84. He also served as interim head coach from 2006-07.

Today, Trask is still involved with Legion baseball as a member of the local Umpqua Post No. 16 commission, as well as serving as the state's 'Zone 4' commissioner.

"I've always been a great believer in legion baseball and the code of sportsmanship," Rod said. "I have an old school belief that you must work hard and respect the game and if you put out a top effort, you'll never lose."

Trask, who made a couple of stops in Bandon (principal) and Riddle (vice principal) before retiring in 2007, has been married for more than 40 years and has two daughters and three grandchildren.