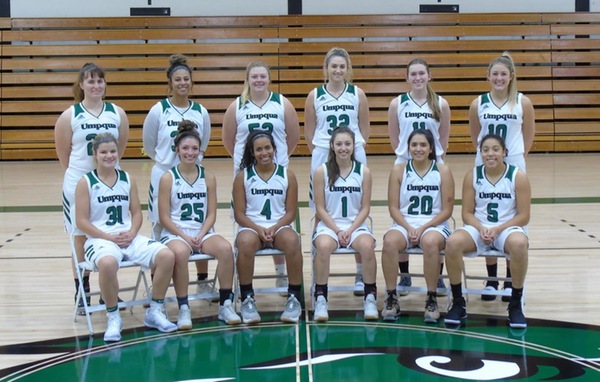 ROSEBURG, Ore. – The Umpqua Community College women's basketball team ended another historic season on the court this past March—breaking records and earning an overall season  record of 32-1.

Although the team did not walk away from the season as this year’s Northwest Athletic Conference champs, they did receive another prestigious recognition.

The 2018-19 team was just recognized for a national Top 25 finish for their off-court performance in academics.

The Umpqua Lady Riverhawks finished the year with a 3.393 G.P.A., which earned the team the #8 ranking in the Women's Basketball Coaches Association (WBCA) Top 25 Team Honor Roll.

Although the team ranked higher last year at #6, which was the highest ranking in the program's history, the team's overall GPA was actually .019 higher than last year's team.

"We have made this list several times over the years, but this is the third straight year we have been in the Top 10,” Dave Stricklin, UCC’s women’s basketball coach, said.

The WBCA Academic Top 25 recognizes NCAA Division I, II and III, NAIA and two-year GPAs inclusive of all student-athletes on their rosters for the entire season.

Coach Stricklin says there is a reason behind the team’s continued success.

“Mandatory supervised study hall, regular grade checks, tutors, and weekly follow-up meetings with each of our players have all been put in place to give each of them the tools necessary to reach their academic potential,” Stricklin said.

“Parents from anywhere in the country can send their daughter to UCC with full confidence that she will be immersed in a culture that promotes both high-level basketball and high-level academics."