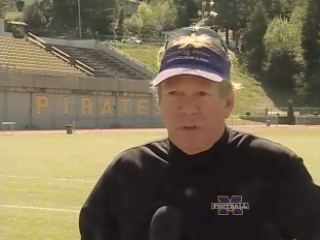 It's been 35 years since a South Umpqua football team played for a state title, but one former Lancer coach made it a regular occurrence appearing in the championship game four times in seven years. Douglas County Sports Online recognizes Kent Wigle as its latest DC Great.

Wigle was an outstanding prep athlete at Riddle High School and went on to play college baseball at Southern Oregon University in Ashland. He eventually made his way back to Douglas County accepting a teaching position at South Umpqua High School. Wigle also became the school's head football coach in 1971.

In his 17 seasons in Tri City, he led the Lancers to four state championship games, including one win, one loss and two ties. South Umpqua beat Tillamook for the 1977 state title with the ties coming against Gold Beach in 1976 and Siuslaw in 1981. The Lancers lost to Vale in 1975.

Brian Johnson (class of '85) was a two-year starter at wide receiver for Coach Wigle and was a freshman when the Lancers played in the 1981 title game.

"Coach was all about teaching us the right way to do things," Johnson said. "He was a great role model and taught the kids that played for him to respect the coaching staff, teachers and our parents."

Wigle left South Umpqua with an impressive record of 134-39-2 and would continue his coaching success at Marshfield High School in Coos Bay. In 21 seasons on the coast, the Pirates were 173-60 with a pair of state title appearances. Marshfield won a state championship in 1992 and made the playoffs 18 times during Wigle's tenure.

Between the two schools, Wigle went 307-99-2 overall and is the third winningest coach in Oregon history. He was also named the national coach of the year in 2005.

The football stadium at South Umpqua High School was officially named after Coach Wigle during a dedication ceremony at the end of the 2014 season. He is the second South Umpqua coaching legend (with Frosty Loghry) to be honored at the facility.