The 'Hawks fell 7-4 in the nightcap after losing the opener 3-1 in a marathon 21-inning game. UCC won the first game of the series on Saturday, 4-3.

Umpqua finished the season with an 18-10 NWAC Conference record and 32-19 overall. 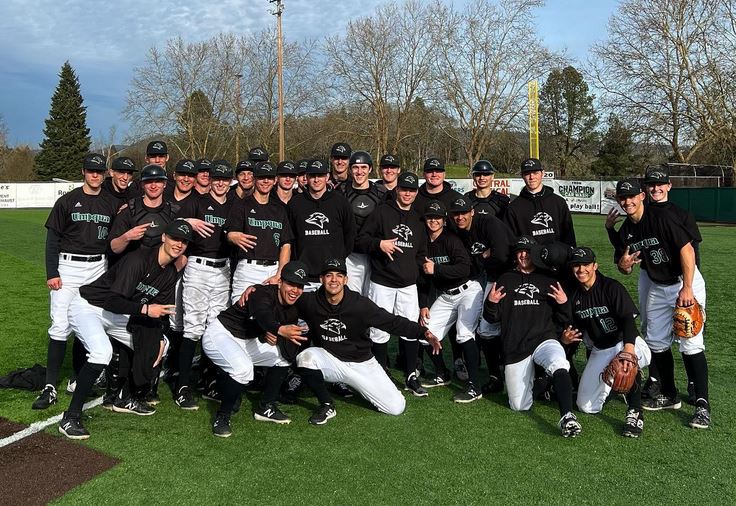 UCC takes 3 of 4 from Chemeketa

The RiverHawks swept the opener in Roseburg, 7-0 and 9-4, at Champion Car Wash Field on Thursday.

On Friday in Salem, UCC took the opener 6-5 before dropping the nightcap, 8-3.

The RiverHawks (7-6 overall) lost the opener 6-1 Friday before battling back for a 5-1 win in the nightcap.

On Saturday, the RiverHawks took the first game 7-2 and Big Bend the nightcap, 9-2.

Up next for UCC is a non-league doubleheader at Linfield against their JV team on Thursday, March 17.

UCC loses 3 of 4 games over weekend

On Sunday, the RiverHawks split their matchups, losing 2-0 to Spokane in the early game and edging Linn-Benton 4-3 in the nightcap.

On Saturday, UCC lost 3-2 to Spokane in the morning game and suffered a 1-0 loss to Linn-Benton that evening.

The RiverHawks are 5-4 overall.

Up next, they host Big Bend in a 4-game series at One Champion Car Wash Field in Roseburg with two games on Friday, March 11, and two on Saturday, March 12.

UCC baseball off to 4-1 start

UCC lost 3-2 in the season opener against Treasure Valley before bouncing back in the nightcap of that Feb. 18 doubleheader for a 5-0 win at Champion Car Wash Field in Roseburg.

Treasure Valley stayed overnight in Roseburg and played a second doubleheader the following day which the RiverHawks swept, 7-4 and 6-0.

The three teams will repeat that schedule on the following day, March 6.