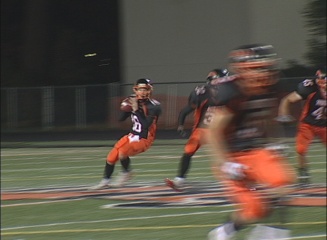 The Roseburg Indians are hoping to get back to the postseason in 2009. Roseburg returns nine starters off of last year's team that finished with an overall record of 3-8, including a first-round playoff loss to McNary.

The Indians started the 2008 campaign with four straight losses, but were still able to earn the fourth and final playoff spot after beating North Medford during the last week of conference action. The following week McNary ended Roseburg's season with a 27-20 come-from-behind win.

"We played our best two football games at the end of the season," Indians head coach Thurman Bell said. "The kids played much more physical and with alot of emotion and what we're trying to do is take off from that point and build on it."

"We struggled early in the year last season, but kept playing hard and still made the playoffs," Weaver said. "Our goal is get off to a better start and battle for a conference title."

"This team has good running backs and a lot of receivers," senior Thaddeus Davis said. "We should be pretty balanced offensively with both throwing and running the football."

With an abundance of skill position players, Roseburg football fans should feel confident about this team's ability to put plenty of points on the scoreboard. But, there is one key difference with the 2009 version of the Roseburg Indians that has the coaching staff excited and it has to do with the talent in the trenches.

"We have quite a few big kids out here," Bell said. "We've been thin in numbers in the past, but now it's going to be difficult just to figure out which kids we want in there."

The 2009 high school football season also marks the legendary coach's 39th year at Roseburg. He is the all-time leader in wins at the Class 6A level in Oregon with 287 victories, including four state championships. Among all coaches at every level, Bell ranks third behind Dayton’s Davey Sullivan and Marshfield’s Kent Wigle.

"I'm still having fun and it's always exciting to see the kids grow and improve," Bell said. "When it ceases to be fun, then I'll watch."

Roseburg opens its season against Gresham on September 4 at Finlay Field.