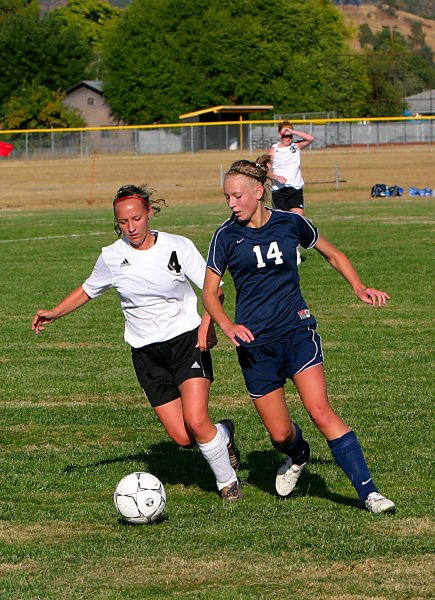 The South Umpqua girls soccer team opens postseason play in the OSAA 4A/3A/2A/1A State Playoffs Tuesday night against Hidden Valley. The match will be played under the lights beginning at 7:30PM at Grants Pass High School.

The Lancers finished the District 3 regular season in second place with a record of 10-2-2. The Mustangs are the number two seed from District 6 and have an overall mark of 12-4.

"We played Hidden Valley during a jamboree earlier this season," South Umpqua head coach Kami Wright said. "It was a pretty even game, so the girls feel pretty confident, plus this is our fourth straight year of making the playoffs."

The Lancers opened the 2008 season with a tie against Sutherlin, but then reeled off four straight wins before playing league champion Brookings-Harbor to a 2-all tie. South Umpqua went on another four game winning streak before suffering its first loss of the year on October 16. The Lancers then finished off the regular season by winning two of their last three games, which included an upset loss to Umpqua Valley Christian.

"I told the girls that losing was a lot like eating your vegetables," Wright said. "You know it's good for you, but you don't always like doing it."

There's also one local boys team still alive in the postseason. Umpqua Valley Christian travels to John Day for a first-round game with Grant Union. The Monarchs enter the game with a league record of 9-3. The Prospectors are 11-1-1 on the season.

(Photo by Will Petterson: Lancers take on Brookings-Harbor earlier in the season)