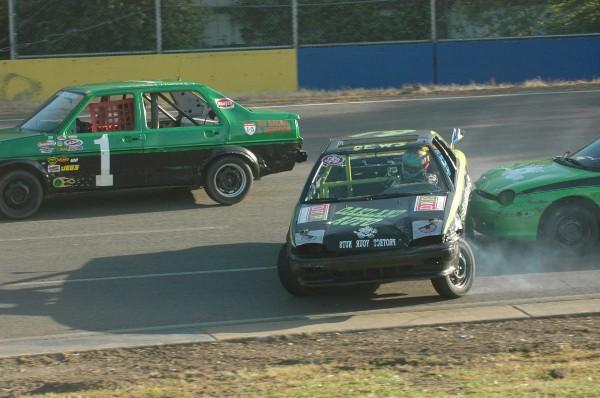 By BZ ZELLER
Ken Scales has towed his No. 42 Modified north on the I-5 Freeway to the Douglas County Speedway many times, earned fast-time honors and won many Main event trophies. Saturday night, the Medford racer returned to DCS and added another prize to his collection.
However, Scales’ latest victory came not by dominance, but by fortune.
“I didn't have the best equipment,” Scales said. “My little 8-inch tires were smaller than the other cars and my motor wasn’t running as fast as the top guys either.”
Scales started on the outside of the front row for the American Speed Association Modified, eight-car, 30-Lap Main. He led the first three circuits, before fast-qualifier Tom Elam (15.834 seconds) found an open seam inside Scales as the leader exited Turn 4. Elam then darted down the front stretch and into the pilot position. The local driver spread his lead to a half-lap advantage over the field before a caution flag and ensuing delay halted the action.
Prior to resuming the race, officials decided to restart the field with a green, white-checkered-flag finish. But, as the green flag waved, Elam’s No. 8 limped off the oval and into the pits. According to his crew, Elam suffered a broken axel before the caution which caused him to fall three laps shy of victory.
“I just tried to be patient and hope something would happen in my favor,” Scales said. “That’s why we race all the way to the checkered flag.”
Roseburg’s Dean Cast, who earlier qualified second fastest (16.183) and won the trophy dash, finished second on the Main. Scales won the Heat.
Chris Schlaht made the trek from the Portland area and ended with a successful Hornet class debut. Schlaht maneuvered through a chicane-configured track of asphalt and dirt and a field of 18 cars to capture the 25-Lap Main.
Dillard’s Tyler Risley led most of the event, before yielding the lead on Lap 20 to Schlaht. But, on the same lap, Monte Cox Jr., drove into a monster tire and flipped his car and landed upside down. The young Oakland racer crawled out of his car on his own and said he was uninjured. Because of the red flag, by rule, Risley returned to t he lead for the restart. Schlaht made his second move around Risley on Lap 23 and held on to victory through the final two circuits.
Oakland’s Dave Jobe was second, Roseburg’s Mopar Dave was third and Risley finished fourth. Andy Nelson Jr., Doug Risley and Benjer Herbert all won their respective Heat races. Andy Nelson Sr. won the Dash and was the fast qualifier (20.096).
Mike Batman won the Old Time Racers of Oregon Main. The Roseburg driver also won the Fast Heat and the fast time (17.862). Tim Jennings, Winston, won the Dash. Stanley Garboden won the first Heat.
Paul Tigrett won the Junk Yard Dogs Main and the Hornet B Main. Simon Talcott, Glide, won the Heat and Don Tigrett won the Dash and the fast time (20.857).
;  Melanie Stutzman and Keiri Smith won the Lady and Junior Stinger respective Mains. Kristen Robbins was the fastest Lady qualifier (21.234) and Bailey Lane topped the Junior timings (21.437). Stutzman also won the Lady Stinger Heat and Ross Huffman captured the Junior Heat. The Junior Stinger drivers are between the ages of 11-14 years old and race standard Hornets.
(Photo By BZ Zeller: Monte Cox Jr., Oakland, is hit during the Hornet Trophy Dash Saturday night at the Douglas County Speedway. You can reach Douglas County Speedway writer/announcer BZ Zeller at This email address is being protected from spambots. You need JavaScript enabled to view it.)