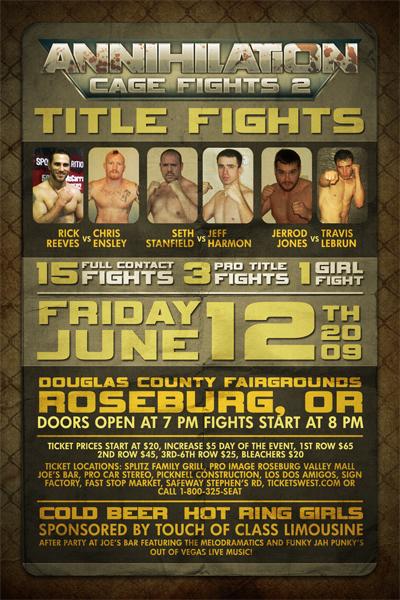 A local mixed martial arts fighter is continuing on the winning path after a main-event victory at Friday's Annihilation 2 Cage Fights event at the Douglas County Fairgrounds.

Seth Stanfill, a Roseburg MMA fighter, improved to 2-0 in his professional career after dispatching Jeff Harmon of Pendleton in the 205-pound Pro Title Fight Friday evening. Stanfill used a flurry of punches after taking Harmon (0-2) to the mat, pinning him against the cage wall. The scheduled five-round match ended in the first via referee stoppage. Stanfill is repped by Roseburg-based House of Pain and is scheduled to return with another fight in front of his hometown crowd October 10.

Two other House of Pain-repped fighters competed for title belts Friday night. In the 185-pound NFL Title Fight, Jaime Harvey of Roseburg fell to Dennis Rockholt (4-1) of Yreka, California. Harvey (3-1) lost via tap-out in the second round. Pain's Brandon Mechum has challenged Rockholt to an October 10 title match.

In the women's 145 NFL Title Fight Lisa 'Kut Throat' Rameriz outlasted Roseburg's Kivonna Coccia, winning by referee stoppage in the third round. Coccia (1-1) landed a score of blows and takedowns in the first round before tiring midway through the second. The more experienced Rameriz (8-3) of Medford's Team Samurai was able to withstand her opponent's early outburst, landing key blows in the third round to end the fight.

House of Pain's Tyler Rowland (1-0) defeated Ryan Drew (0-1) of Grants Pass for his first victory in a 155-pound match-up, and Pain's James Bennett (1-1) picked up his first victory against Roseburg independent Chris Britmyer at 205 pounds.

Annihilation 3 is scheduled for October 10 at the Douglas County Fairgrounds and features a pro fight between Chris Folsom and Jeremy Rockholt, both hailing from the Roseburg area. A long-awaited pro bout featuring local favorite Rick Reeves is also on the tentative schedule.