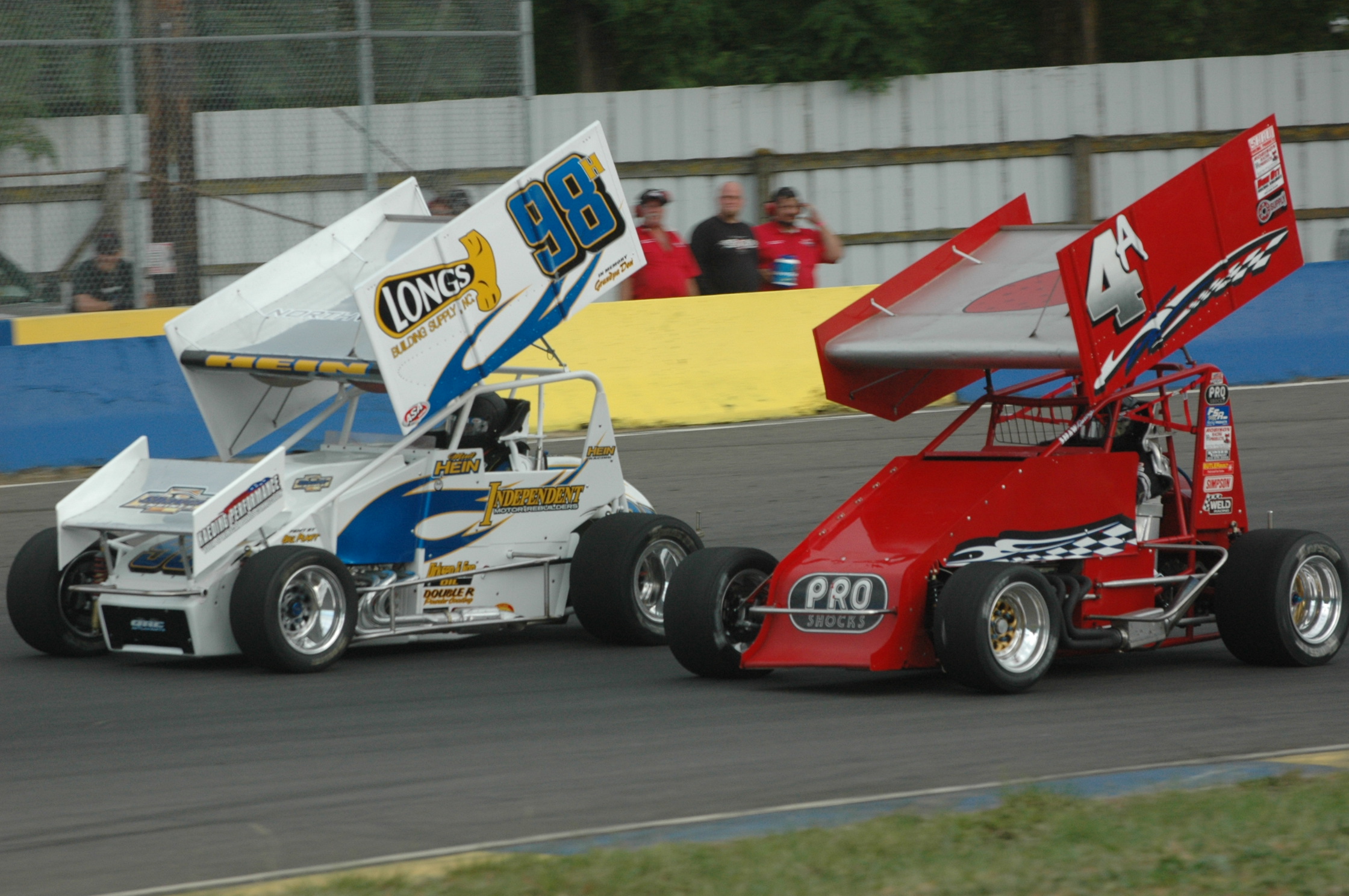 It was Win, Place and Show for the top local contingents in the Casey Diemert Classic Saturday night at the Douglas County Speedway.

The annual Classic is named in tribute to the late Casey Diemert, a Roseburg High graduate and former DCS champ who was killed in a 1999 practice session at Irwindale (Calif.) Speedway.

Brown, who was fifth fastest of the 16 entries during the time trials, started on the outside in the second row of the starting grid. The 5-time NSRA champ shadowed Craig Deaver, Sumner, Wash., for the first 24 laps before he was able to dart inside and snare the lead on the backstretch. Hein raced tight behind Brown and made the pass underneath Deaver a moment later.

Hein, the fast time winner with a lap of 12.614 seconds, spent the final 16 circuits looking for an opening to switch places with Brown. But the savvy veteran found the checkered flag before the 2006 Roseburg High grad could pass him.

“I’m just glad I had enough to hold off the boys (Hein and Alberding),” Brown said. “It was a great, safe race.”

As Brown hoisted the trophy in the air, with a crackled voice he announced, “this one’s for Casey.”

Hein began the 40-Lap feature outside of Alberding on the fourth row. His finish behind Brown maintained his season points lead and his quest to repeat as NSRA champ.

“I was hoping there was going to be an opening as we went through slower traffic to pass him (Brown), but it just didn’t happen,” Hein said. “I’m happy with second place tonight.”

Willie Thompson, Salem, led every lap of the ASA/Modified Main. Kris Nace, Glendale, and Dean, Roseburg were second and third. Nace, who swept the Dash, Heat and Main last time out, won the Dash and Heat Saturday before narrowly running his win streak to six. Tom Elam, Powers, won the fast time, 15.546.

Rob Mueller and Mike Batman each continued to pace their respective race classes.

Mueller led the 14-car Mini Stock field to another Main victory. The race was halted briefly when Roseburg’s Dale Roth, who was running second, had his throttle stuck. Roth’s car crashed off the wall near the pit entrance and suffered front end damage. Roth, however, was able to walk away from the scene.

Batman topped the Old Time Racers of Oregon field in his Main. Tim Jennings, Winston, finished second in the Main and won the Dash. Batman added the Heat and fast time, 17.548, to his Main win.

(Photo by BZ Zeller: Matt Hein (98) and Ray Douglas (4) at the 2009 Casey Diemert Classic at the Douglas County Speedway)

You can reach Douglas County Speedway writer/announcer BZ Zeller at This email address is being protected from spambots. You need JavaScript enabled to view it.