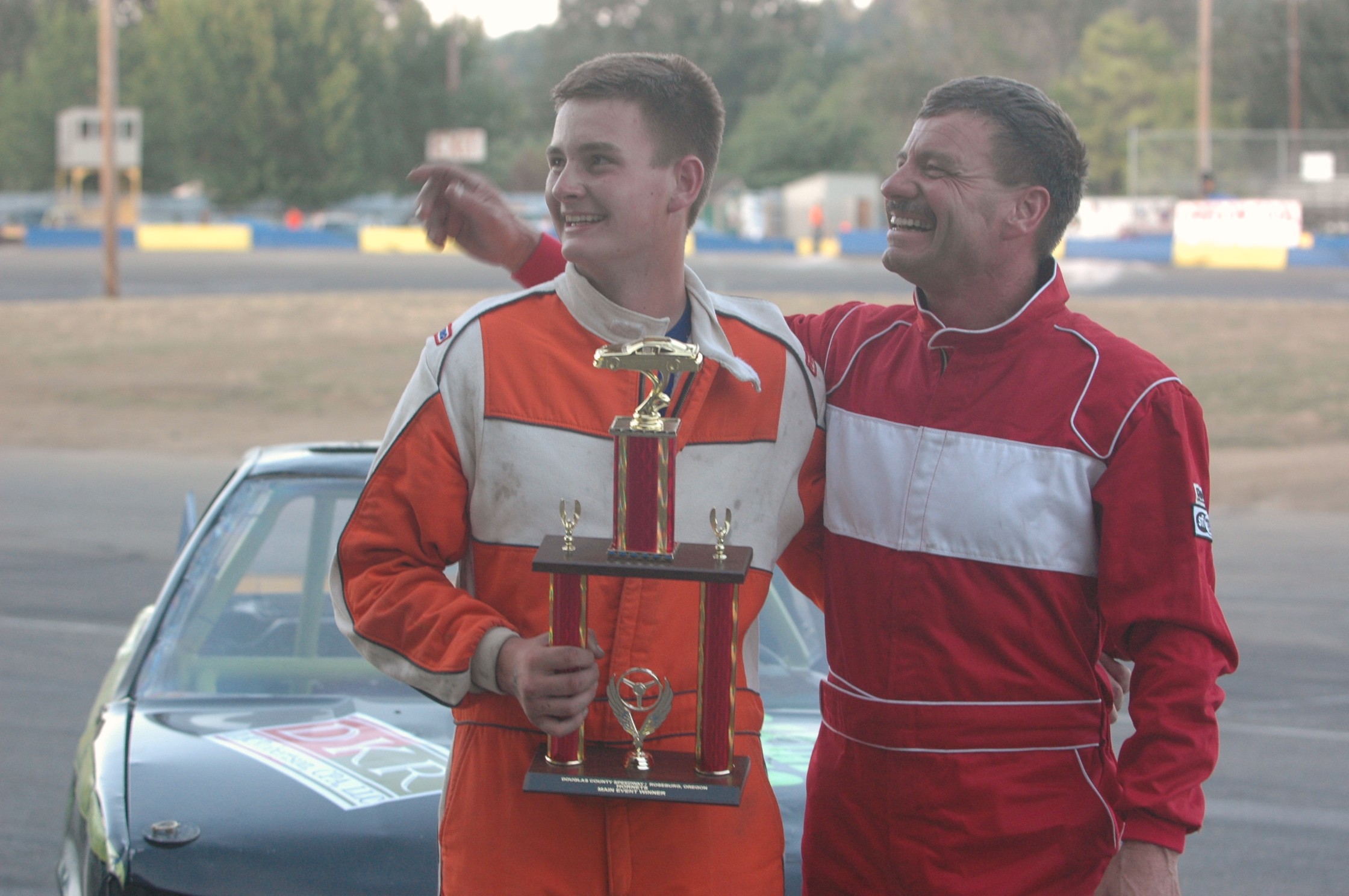 Monte Cox, who had raced for years in a sprint car, had never experienced the thrill of being the first driver to the checkered flag. His son, Monte Cox Jr., has already become a regular race winner.
But Saturday at the annual Douglas County Fair races, in front of the largest crowd of the season, the Oakland father made his return inside a racecar and subsequently made his debut in the winners circle.
Cox and his son built a new faster car for the Oakland High student, which freed up the original No. 19 Hornet and allowed the father-son duo to compete together on the track.
The Hornet feature boasted the largest car count of the race with 20, four-cylinder cars buzzing around the oval. The Coxes started near the rear of the field and quickly made their way to the front of the pack. With less than half the Main complete, Cox Jr., who was the fastest qualifier, assumed the race lead. Two circuits later he was clipped by Bob Vancil, spinning the young prodigy. The brief altercation held up the lead two cars just enough for Cox to dart to the front and later to the ensuing victory.
Cox said the win was extra special because his son was able to battle back in the race and finish second. With his win in the Fast Heat and the time trial, Cox Jr. added to his season points lead over David Beals. Don Tigrett and Daniel Butterfield are also in the top five of the championship points race.
It was a near sweep in the High School Hornet Race. Cox Jr. captured the victory with fellow Oaker Daniel Jobe second and Andy Nelson Jr., of Roseburg High in third.
Another Oakland High student, Benjer Herbert drove to victory in the Super Stock Main. Winston’s Bob Brumback led most of the race before Herbert passed him following a caution on Lap 10. Doug Risley finished second and Brumback was fourth.
During the checkered flag lap, Don Livermore crashed into the backstretch wall and then vaulted off the concrete barrier in Turn 3. Livermore was extricated from his No. 17 and transported to the hospital. His wife Jayn said he was scheduled for surgery today for a broken neck and that doctors expect him to recover well. The 70-year-old Livermore was conscious and talking with safety crew members following the incident.
Brumback won the Heat, with Risley and Bobby Wright finishing second and third respectively. The victory by Herbert added to his points lead and put him closer to a championship in his rookie campaign. Don Moore began the day just 19 points behind.
The Street Stock season points leader, Amos Rhodes, won his Main, Heat and was the fast qualifier. Jeff Solberg=2 0was second in the Heat.
The race for the ASA Modified championship tightened up as Steven Snauder captured his first Main. Roseburg’s Dean Cast began the day with a 21-point advantage over Glendale’s Tom Ford. Cast suffered damaged to his car after being spun by Tom Elam and did not finish. Ford crashed during the Heat and did not start the Main. Snauder, in third place on the season, trailed Cast by 74 points. Cast won the Heat with Elam second and Snauder third. Elam was the fast qualifier.
Jessy Jobe moved closer to locking up the Lady Stinger points title with another Main win. Ricky Perry won the Junior Stinger Main for the second consecutive time. The young Winston racer also leads the Junior class in points.
Racing resumes Saturday at the Douglas County Speedway featuring a Demolition Derby, the ASA Modifieds, Mini Stocks, Super Stocks, Street Stocks, Old Time Racers and Hornets.
*You can reach Douglas County Speedway writer/announcer BZ Zeller at This email address is being protected from spambots. You need JavaScript enabled to view it.
(Photo by BZ Zeller: Monte Cox Jr. and Monte Cox celebrate after finishing first and second in the Hornet Main Saturday at the Douglas County Fair.)