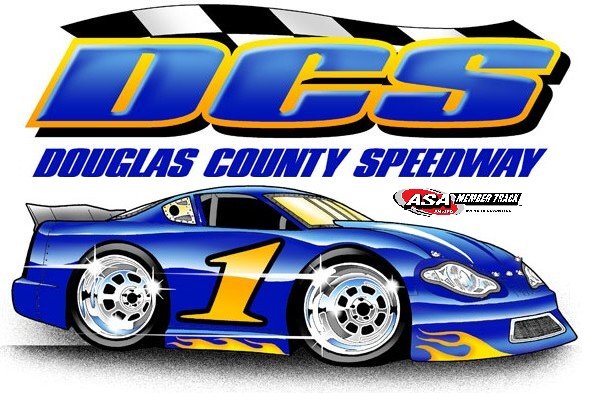 By BZ ZELLER
Rob Mueller has almost mathematically clinched his third consecutive Mini Stock points championship after winning his division’s Main Event Saturday night at the Douglas County Speedway.
For the driver of the No. 33, it was his ninth Main win this season in ten races. Mueller started in the back of the 16-car field and assumed the race lead on Lap 6 of the 25-Lap Main. Coming off his first second place finish just weeks ago, victory almost slipped away again.
“I could get into Turn 1 good, but from center on, the car wanted to shove into the wall,“ Mueller said. “And in Turn 3, I couldn’t get the car to stop and turn because of brake problems.“
With just two laps before the checkered flag, a hard-charging Dale Roth nearly took advantage of Mueller slipping out of Turn 4, but the two-time champ was able to hold off the No. 55.
Mueller said finding the motivation to return to the winners circle was natural.
“I don’t like letting my own car beat me,” Mueller said. “I always want to figure out how to work my car and the setup right. I’m constantly motivated to win races.”
Although he has aspirations of moving up in class, Mueller said he enjoys the camaraderie with the Mini Stocks.
“I really like racing with all the drivers in my class,“ Mueller said. “We’re almost like a family. We help each other out with our cars before the races and then we go out after the races.”
Steven McMahan, Jason Gotz and Dale Yarbrough finished third through fifth respectively. Gary James won the first Heat before his wife, Dena James, won the fast Heat. Roth won the Dash and Mueller turned the quickest lap in qualifying (18.200 seconds).
Yarbrough is second in the season points race with McMahon in third.
The other large starting grid came in the Hornet class where Cody Rassmussen won his first Main of the season. Rassmussen piloted his No. 24 first to the checkered among the 14 competitors in the 20-Lap Main. Season points leader Monte Cox Jr. was second, followed by David Beals, Andy Nelson Jr. and Andy Nelson.
Nelson and Rassmussen won their respective Heats and Cox was the fast timer (19.830).
Dean Cast added to his ASA Modified points advantage after winning the Main, Heat, Dash and Time Trial (15.897).
Tom Ford was second in the Main followed by Scott Sheraden, Jim Simmons and Steven Snauder.
Benjer Herbert and Don Moore finished first and second r espectively in the Super Stock Main, Heat, Dash and Trial.
Amos Rhodes won the Street Stock Main in front of Jeff Solberg and Nick Cornilsen. Solberg won the Heat and Rhodes won the Dash and Trial (17.363).    Rick Jump, who began the night as the season points leader, had engine failure in the Heat and was not able to start the Main, yielding the way for Rhodes to now top the standings.
Mike Batman won the Old Timer Main. Tim Jennings, Dustin Trotter, Trevor Thomason and Mark Minter finished second through fifth. Thomason won the Dash and Batman won the Trial (17.461).
Keith Roberts won the Demolition Derby in a duel with Josh Cox.
Racing resumes Saturday at the Douglas County Speedway featuring the ASA Northwest Late Model Tour 125. Also on the race card is the Outlaw Compact/Mini Stock Invitational, Super and Street Stocks, Hornets and Junior and Lady Stingers. Gates will open at 4 p.m. with qualifying starting at 5 p.m.
*You can reach Douglas County Speedway writer/announcer BZ Zeller at This email address is being protected from spambots. You need JavaScript enabled to view it.