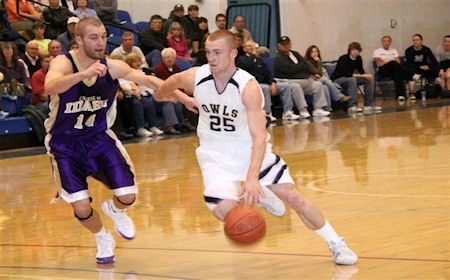 Oregon Tech senior Justin Parnell, a former standout at Sutherlin High School, has been voted the 2009-2010 Cascade Collegiate Conference Player of the Year in men’s basketball.

Parnell ranked second in the CCC in scoring with 18.8 points per game and led the conference with 4.72 assists per game. His assist/turnover ratio was 2.66, also a conference high. The 6'4" guard averaged a team-leading 5.9 rebounds per game in league play.

“Justin is a great leader and competitor, with special offensive skills,” says OIT coach Dan Miles. “He is the best on-ball defender I have ever coached.”

Parnell was also voted Player of the Week twice during conference play. To read the complete story from the CCC's website, click here.

The Klamath Falls-based Owls are currently 15-3 in conference play, 28-4 overall.