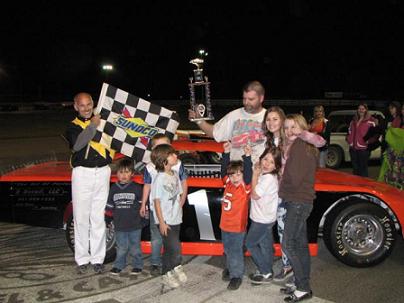 Riley Watson returned to the Douglas County Speedway in winning form on Saturday night in the Snapware Glasslock Late Model Division at the Douglas County Speedway.  Riley suffered a mechanical failure and Brad Watson, Riley’s father, gave up his ride to Riley so the former J-car driver could show the crowd that he hasn’t lost a step at the 4/10-mile track.  Due to the driver change, Riley was forced to start in last place in the fourteen-car field.  The race had its share of excitement as rookie Jim Brock’s transmission exploded in to a ball of fire while on the backstretch that brought out a short red flag condition.  Brock was uninjured from the incident.

2009 Late Model champion Dale Roth and young Anthony Pope shared some words after the feature due to contact between the two during a caution.  Under caution, while getting in their proper positions, the two collided on the front stretch.  Pope felt it was unnecessary and drove in to the back of Roth’s car, nearly picking the rear end off the ground.  “I won’t be intimidated”, said young Anthony at the end of the night.  “If he wants to do me like that, I can do him like that.”

Ben Herbert Jr showed he can run with the best of them at a young age as he held off the veteran Dale Roth in the Race of Champions.  The Race of Champions places all of the 2009 division champions in evenly matched cars to crown an overall “Champion of Champions”.  Herbert received the title as the two drew two very fast cars with the luck of the draw and began to put space between them and the rest off the field in no time.  The veteran Roth was attempting to school the young driver, but Herbert proved to be experienced beyond his 17 years.

Daniel Jobe wins his very first main event in his first race in the street stock division.  Daniel started out in the hornet division and moved up to the mini stocks last year.  He qualified third fastest which set him up for the historic win.  Daniel was very excited about what looks to be a very promising season for the rookie driver.  Former mini stock champion Rob Mueller, Gary Perry, and others suffered mechanical issues, leaving a small but exciting field for the main event.

Mike Batman and Tim Jennings provided the crowd with a spectacular photo finish in the Old Time Racers of Oregon main event as the two collided coming across the finish line and put Batman in to the wall.  The two were battling for the win as they attempted to elude a slower car, which allowed Batman to squeak out the win in a finish that was so close that the crowd wasn’t sure who won until it was announced over the PA system.

David Beals continues his collection of hardware as he takes home another Taco Bell Hornet main event trophy home.  Driver Jeff Solburg and Beals had a long battle as the two friends were bouncing off each other for the lead.  Early in the race, Solburg’s car received some damage and caused the rear bumper cover to come off, but remained attached to the car.  Under a couple of the caution laps, Beals attempted to remove Solburg’s cover completely by driving over it in an attempt to help his friend out.  Eventually, Beals decided he was done playing with his friend and took over the lead and the trophy.

The Pacific Racing Association takes a week off and returns to racing on May 8th for the Mother’s Day Race.  All moms get in free with the first 50 receiving a rose from Parkside Flowers.  Best Country 103 is teaming up with PRA to award 5 moms some fantastic prizes including a getaway trip to the coast, dinners, and jewelry.  Rio Networks will also be awarding a mother a limo ride and a trip to the spa. Divisions racing on May 8th will be the Modifieds, Super Stocks, BC Auto Parts Mini Stocks, J-cars, and the Taco Bell Hornets.