Sprintcars are Coming to DC Speedway 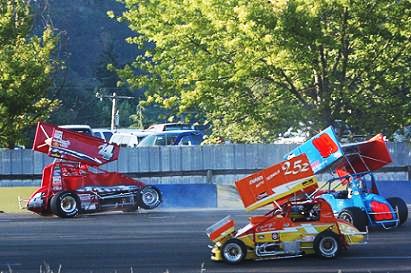 By BZ ZELLER
The sprintcars are coming!
For the first time, the Northwest Sprintcar Racing Association/American Speed Association will open its tour in Roseburg. The lightweight, high-powered racers will be the feature event as 20 teams are expected to compete in the Hein/Diemert Memorial Saturday night at the Douglas County Speedway.
Fueled by methanol and powered by 360-cubic-inch engines that produce 750 horsepower on 1625-pound cars (including driver), fans can expect to witness sub 13-second laps on the short, half-mile oval.
The event will be a combined memorial this year due to NSRA/ASA only making two stops in Roseburg, rather than three in previous seasons. The sprinters are also scheduled to race July 24 in the annual Art Pollard Memorial.
Don Hein and Casey Diemert were separated by generations, yet will be forever joined as local legends. Hein, who passed away in 2002, won five championships and five Nickel Cup races in a career that spanned more than 30 years of winning at the Roseburg track. Diemert, a Roseburg High graduate and former DCS champ was killed in a 1999 practice session at Irwindale (Calif.) Speedway.
Ironically, both the Hein and Diemert name will play a role in Saturday’s feature.
Hein’s grandson Matt returns as the two-time defending NSRA/ASA champion with his father Ron Hein as crew chief. Diemert’s father, Jim Diemert, is the crew chief for former NSRA champ Andy Alberding. Hein’s white No. 98 and Alberding’s red No. 76 are expected to be top qualifiers Saturday. Alberding is the track record holder (12.494 seconds).
“Hopefully we win more races and another championship this year,” Matt Hein, a 2006 Roseburg High grad said. “We’re looking for more consistency. Last season it seemed like we were either right on or off a bit with the car’s setup. We want to finish in the top five every race this year.”
Ray Douglas, Winchester, Vern Scevers, Crescent City, and Rick Brown, Springfield will join Hein and Alberding as other local contingents.
Last year’s Hein Memorial winner was Washington teenage sensation Cory Lockwood, who led every lap from green to checkered. Lockwood, along with Jeff Montgomery of Canada, will return with trophy aspirations. Also expected is female teen Sierra Jackson, Todd Coleman, Randy Dubois, Greg Ochs, Greg Mittendorf and Matt Mansell.
Alberding, who has been working with NSRA brass to bolster the 2010 tour, said he’s excited about both racing and about fan support.
“We’ve been working real hard in the off season to build the local sprint car interest back in Roseburg again,” Alberding said. “I don’t have any anxiety about the race, but I’m definitely anxious to go racing again. I hope everything on the car works okay and the fans get a great show too.”
Like Alberding, Hein is also race ready.
“This is the most prepared I’ve been,” Hein said. “The car’s ready to rock.”
Also on the race card are Modifieds, Super Stocks, Mini Stocks, J-Cars and Hornets. Gate open at 4 p.m., qualifying is at 5 p.m. and racing starts at 6:30 p.m.
(You can reach NSRA media liaison BZ Zeller at This email address is being protected from spambots. You need JavaScript enabled to view it.)