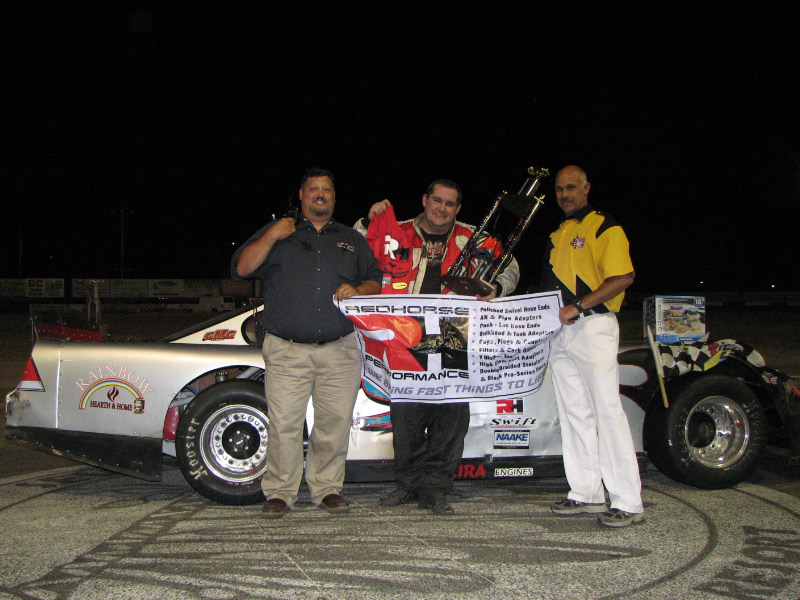 By Rick Perry
It had been a while since Randy Houston had raced at the 'Fast Track to Family Fun' known as the Douglas County Speedway in Roseburg, Oregon.
“I love coming here, but it seems that I have a lot of bad luck here”, Houston said.
Well, that luck has changed as Houston took home $2,000 and the custom-made trophy for the Oregon National Guard Firecracker 125 Saturday.
Houston set fast time in qualifying for the 17 car field made up of cars from all over Oregon and California.  However, that was short lived as he drew a 12 car invert in front of a great crowd.  He threw his head back in disgust and laughed as he saw his draw, but he knew he would have plenty of time to get back to the front.
It didn’t take long to see that the drivers meant business as local contenders like Dale Roth and Kyle Pope got caught up in incidents, one of which ended Roth’s night. Pope was still able to manage a top 10 finish in a damaged car.
The race was run in two segments, the first consisting of 75 laps while the final segment was a 50 lap shootout.  Other classes were run in between the two segments, allowing the drivers to make adjustments and tire changes for the shootout.  Houston took the lead before the end of the first 75 laps and was able to hang on to the lead the entire 50 lap shootout, despite being challenged several times by local Riley Watson and Robert Hirschbock.
Watson kept Houston in view and threatened to take over the lead several times from Houston, but Houston’s #9 had none of it.  Watson finished a great run in second place while Watson’s father, Brad, brought home a fourth-place finish.
After blowing a motor in Friday's practice run, Robert Hirschbock put on a great show and made his hard work pay off.  Hirschbock and crew had to drive back home to Klamath Falls on Friday night to change motors in time to make it back to Roseburg for the race on Saturday. They took home a third-place finish.
Youngster Steven Snawder, running on a limited race budget, had a great night and brought his car home in fifth place.
Street stocks and Taco Bell Hornets were also on the card for the night with 30 lap main events between the two segments.  Rookie and point leader Daniel Jobe took home the street stock win while veteran Jeff Solburg won the Hornet main event.
Racing resumes this Friday, July 9th, with Graffiti Night at the Races when special interest cars strut their stuff for the crowd.  Divisions racing will be the Modifieds, Super Stocks, BC Auto Parts Mini Stocks, and the Old Time Racers of Oregon.  Gates open at 4, qualifying at 5, racing at 6:30.  Cost is $20 for families, $8 for adults, $6 for Seniors and Military, $2 for children (7-15) with children 6 and under free.
For full results, please visit www.dcspeedway.com