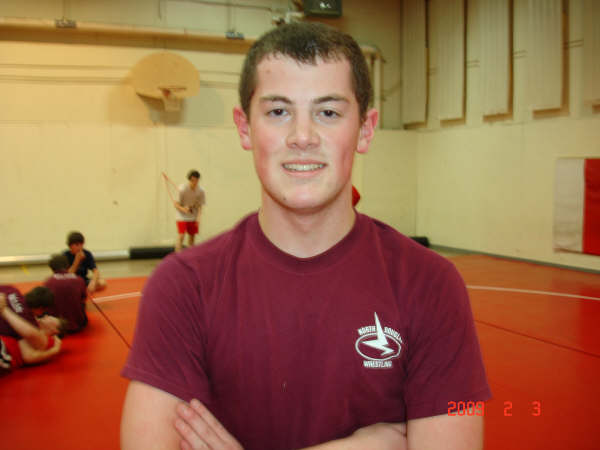 This three-sport athlete has earned All-league honors during every year of his varsity career despite having to battle through two major leg injuries in the past four years. Douglas County Sports Online honors North Douglas High School senior Will Holloman as its latest Athlete Spotlight.

Will grew up in Douglas County and attended elementary, middle and high schools in Drain.
The 18-year old senior, who has exceled in football, wrestling and baseball during his years at North Douglas, always knew athletics would play a key role in his life.

"Since I was a little kid, I played every sport I could," Holloman said. "It was a way to hang out with my friends, plus I've always enjoyed competing."

During his three years of varisty football, Will played on the offensive line and received All-conference Honorable Mention honors as a sophomore and junior. This past fall, he was named to both the second-team offensive and defensive teams despite breaking his leg October 10 at Glendale.

"I broke my fibula after I got stepped on and the surgeon had to put a plate and eight pins in the leg," Holloman said. "I actually broke my ankle during my freshman year and never thought it would happen again."

"He was the leader of our offensive line," North Douglas head football coach James Shelton said. "Will is a blue-collar type of guy that does everything you ask of him."

The injury ended his prep football career early and put a damper on most of the 2008-09 wrestling season, but recently he had his final surgery and still has plans on competing in the last couple of dual meets of the season and the upcoming District championships. As a junior, he finished fourth at Districts and failed to qualify for the State Meet.

"They weren't messing around with my weight class," Holloman said. "The top two guys at District went on to finish one-two at State."

But Warrior fans don't need to worry, because Will is also an excellent baseball player. He is a returning first-team All-conference left fielder and hopes to be one hundred percent for the opening of spring practice. Last season, he hit .370 as a junior and committed no errors the entire season.

"I'm really excited about baseball," Holloman said. "It's the only sport I'm going to be able to play all season long."

Will is also a fantastic student carrying a 3.8 GPA and plans to major in Wood Science and Engineering this fall when he attends Oregon State University in Corvallis.